The hot news today is the scandalous revelation that the IRS spent $4.1 million on an employee conference in Anaheim a few years back. Here’s a typical description:

Some 2,600 Internal Revenue Service managers gathered in Anaheim, Calif., in August 2010 were treated to $50,000 worth of comic videos and $135,000 worth of guest speakers, one of whom collected $17,000 to paint portraits of famous personages on stage, an audit found….Some $64,000 was spent on giveaway swag for all attendees, including thousands of logo-emblazoned “brief bags” and spiral journals, 800 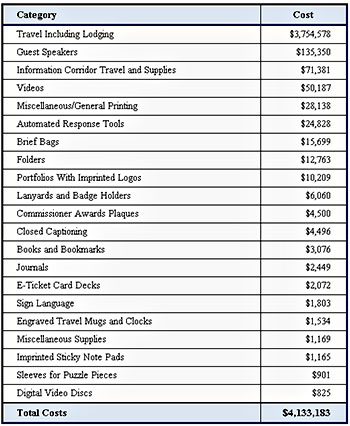 lanyards, 75 travel mugs and 75 picture frame/clocks, and various other customized knickknacks such as pens, can coolers and Post-It notes.

Can we talk? Yes, the Inspector General found that the event planners didn’t always follow proper procedures, and I’m painfully aware that stuff like this often sounds dumb when you read about it after the fact. What’s more, a few of the items in the IG report sound genuinely dodgy. But honestly, there’s less here than meets the eye. The IG found that the IRS “did not use available internal personnel to assist in searching for the most cost-effective location as required,” and I assume that’s true. But you know what? There are surprisingly few places where you can hold a conference for 2,600 people. Just ask anyone who’s ever done one of these things. And in the end, the total cost ended up at about $1,600 per person for a three-day conference. That’s….not bad, actually. Again, just ask anyone who’s ever done one of these things.

And for what it’s worth, can I add that every single private company in the country has held more of these kinds of conferences than you can count? Yes, there’s a Dilbertish case to be made that they’re stupid and a waste of time. I was always fairly cynical about them, myself. But trust me: the rock-jawed titans of the private sector do all this stuff and more every single year. You might think it’s dumb, but they all seem to think it’s worthwhile. Is it any surprise that IRS management figured it was worthwhile too?

The Obama administration cracked down on this stuff long ago, and there’s very little of it still being done. That’s probably good optics, but it’s less clear that it’s good management. After all, it’s not as if getting everyone together once a year for some face time is an obviously stupid thing to do. Either way, though, let’s keep this in perspective. I know that’s hard because this stuff is such an easy target, and I know that defending it is a lose-lose proposition. But just talk to some of your friends who work for large corporations. They’ll tell you. Not only is this kind of conference nothing out of the ordinary, but by private sector standards it sounds positively restrained. As scandals go, this is pretty weak tea.