Advanced economies need lots of capital to operate efficiently. But is more capital always better? Longtime readers know that I have my doubts: there are diminishing returns to everything, and there’s a point at which access to capital is so widespread that making access easier doesn’t do much good. In fact, it might even make things worse. If increased access to capital isn’t matched by an increase in labor income, then there’s a mismatch: lots of capital sloshing around, but not a lot of 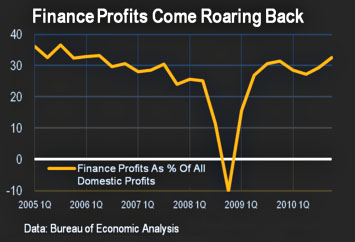 good opportunities to invest in real-world production of goods and services. The result is a financial bubble.

Today, Brad DeLong reviews the bidding and concludes that this is probably right:

Bruce Bartlett points to Greenwood and Scharfstein, to Cechetti and Kharoubi’s suggestion that financial deepening is only useful in early stages of economic development, to Orhangazi’s evidence on a negative correlation between financial deepening and real investment, and to Lord Adair Turner’s doubts that the flowering of sophisticated finance over the past generation has aided either growth or stability.

Four years ago….[it] seemed to me then that in a world short of risk-bearing capacity with an outsized equity premium virtually anything that induced people to commit their money to long-term risky investments by creating either the reality or the illusion that finance could, in John Maynard Keynes’s words, “defeat the dark forces of time and ignorance which envelop our future”.

….But the events and economic research of the past years have demonstrated three things. First, modern finance is simply too powerful in its lobbying before legislatures and regulators ….Second, the growth-financial deepening correlations on which I relied do indeed vanish when countries move beyond simple possession of a banking system, EFT, and a bond market….Third, the social returns to the U.S.’s and the North Atlantic’s investment in finance as the industry of the future over the past generation has, largely, crapped out.

We still haven’t come to grips with this. Dodd-Frank was a weak bill, and it’s getting weaker by the day as finance lobbies scramble to gut its implementing regulations. Likewise, Basel III’s capital requirements for banks are—probably—an improvement over Basel II, but they’re still nowhere near adequate. At the same time, the bargaining power of labor, already weakened by deunionization, globalization, and skill biasing, is starting to be weakened even more by the slow but inexorable march of automation.

Until we deal seriously with this stuff, we’re just setting ourselves up for more misery. It’s practically an iron law of finance that when capital piles up because there are too few productive projects to invest in, eventually it gets stupid. The result is a frenzy of some kind or another, and then a bust. Eventually, even Wall Street and the Republican Party will have to face up to this.