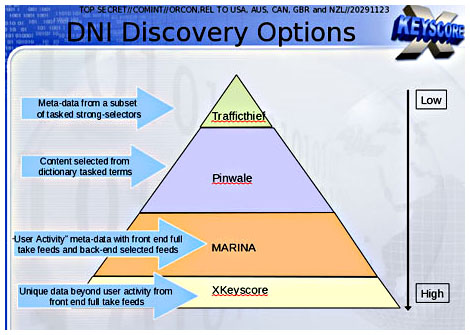 Glenn Greenwald’s latest disclosure from the Snowden files is an NSA program called X-KEYSCORE, which provides access to a truly vast amount of information. How vast?

The quantity of communications accessible through programs such as XKeyscore is staggeringly large….The XKeyscore system is continuously collecting so much internet data that it can be stored only for short periods of time. Content remains on the system for only three to five days, while metadata is stored for 30 days. One document explains: “At some sites, the amount of data we receive per day (20+ terabytes) can only be stored for as little as 24 hours.”

To solve this problem, the NSA has created a multi-tiered system that allows analysts to store “interesting” content in other databases, such as one named Pinwale which can store material for up to five years.

It’s not clear precisely what’s available through X-KEYSCORE, but it appears to be exclusively foreign signals intelligence: phone conversations, emails, chat, etc. Because it’s non-U.S., this includes the content of the communications, not just the metadata:

An NSA tool called DNI Presenter, used to read the content of stored emails, also enables an analyst using XKeyscore to read the content of Facebook chats or private messages. An analyst can monitor such Facebook chats by entering the Facebook user name and a date range into a simple search screen. Analysts can search for internet browsing activities using a wide range of information, including search terms entered by the user or the websites viewed….The XKeyscore program also allows an analyst to learn the IP addresses of every person who visits any website the analyst specifies.

But does this include U.S. persons, or only foreign nationals? This is where things get a little murky:

Under US law, the NSA is required to obtain an individualized Fisa warrant only if the target of their surveillance is a ‘US person’, though no such warrant is required for intercepting the communications of Americans with foreign targets. But XKeyscore provides the technological capability, if not the legal authority, to target even US persons for extensive electronic surveillance without a warrant provided that some identifying information, such as their email or IP address, is known to the analyst.

….The NSA documents assert that by 2008, 300 terrorists had been captured using intelligence from XKeyscore.

….While the Fisa Amendments Act of 2008 requires an individualized warrant for the targeting of US persons, NSA analysts are permitted to intercept the communications of such individuals without a warrant if they are in contact with one of the NSA’s foreign targets….An example is provided by one XKeyscore document showing an NSA target in Tehran communicating with people in Frankfurt, Amsterdam and New York.

Greenwald suggests that this validates Snowden’s statement in an earlier interview that “I, sitting at my desk, certainly had the authorities to wiretap anyone, from you, or your accountant, to a federal judge, to even the President if I had a personal email.” But that’s not clear at all. X-KEYSCORE appears to be a database search tool, not a real-time surveillance tool, nor does it appear to give anyone “authority” to wiretap a U.S. citizen. Rather, it provides access to tremendous volumes of foreign communications, which can then be searched by NSA analysts.

As Greenwald points out, there are known “compliance problems” with NSA’s surveillance programs, since communications by U.S. persons end up in this database if the other end of the conversation is overseas—and these communications can therefore end up on an analyst’s desktop. The NSA’s minimization procedures are supposed to prevent such “inadvertent” targeting of U.S. persons, but as Greenwald reported earlier, there are plenty of exceptions to this rule.

Anyway, this is my best guess about what this all means. But I might have missed something. Read the entire story for more.