A week or so ago, there was a mini-flurry of blog posts announcing that peak oil was dead. Thanks to shale oil, tar sands, heavy oil, deepwater oil, and all the other kinds of oil that the peakists didn’t know about, the world was now practically drowning in the stuff.

The whole thing was very strange for several reasons. First, the peak oil community not only knows about all those kinds of nonconventional oil, its forecasts have always included them in minute detail. The question isn’t whether they exist, it’s when production declines in existing mature fields will outpace the modest amounts of new oil we’re getting from nonconventional sources and new drilling technologies. Second, the world isn’t drowning in oil. There’s no dispute that shale oil has ramped up over the past few years, but it’s added only a couple of million barrels a day to worldwide production and it’s likely to start declining pretty quickly (within five or ten years or so). It’s really not that big a deal on a global scale. Third, peak oil has never been only about the exact date that production of oil hits its highest point. It’s been about how long production will plateau; how steep the subsequent decline will be; how expensive it will be to extract 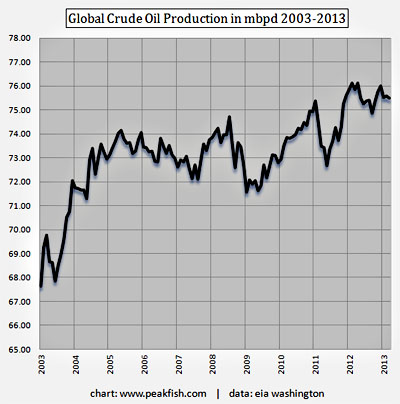 nonconventional oil; and how much oil prices will spike up and down as demand bumps up permanently against supply limits.

Hell, a few years ago even the International Energy Agency‌—which historically had refused to acknowledge production limits even theoretically—finally admitted that peak oil was a reality. When you lose the IEA to the dark side, you really ought to just admit defeat.

That said, for the past few years I haven’t been following peak oil in minute detail. I’ve written occasional blog posts on related topics, but that’s about it. So I didn’t respond to the peak oil flurry because I no longer have detailed, up-to-date knowledge of where we are. However, Chris Nelder does, and he has a long blog post today that will bring you up to speed if you’re interested in the latest data. Pay particular attention to the distinction between “crude oil” and “petroleum liquids.” They’re both worth tracking, but they’re different things and they serve different needs. Liquids are useful for a variety of purposes, but if you want gasoline for your car, the only thing you care about is the supply of crude oil.

For what it’s worth (which isn’t much), I note that Nelder and I happen to agree on the overall shape of things: Crude oil production has been almost flat over the past decade, and the likely date of the overall global peak is sometime between now and 2020. After that, we’ll be in irrevocable decline.