“People of the same trade seldom meet together, even for merriment and diversion, but the conversation ends in a conspiracy against the public,” Adam Smith wrote in the 18th century. Today in the LA Times, FCC commissioner Ajit Pai writes about the 21st century 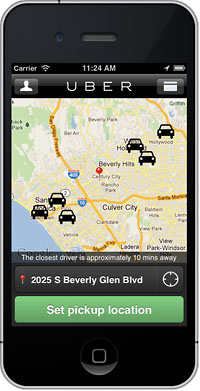 version of this. He starts off with the travails of Uber, the taxi service you can hail on your smartphone instead of vainly flailing your arms around and hoping that someone eventually notices:

Like many consumers, I love Uber. But not everyone does….Last month brought another roadblock. The city of Los Angeles ordered the company (along with Lyft and Sidecar) to stop operating. In the last few weeks, four of Uber’s drivers have been arrested in undercover stings to catch “bandit taxicabs.”….What’s motivating all of this? Simply put, Uber and the other companies are a threat — a threat to entrenched incumbents.

….Tech start-ups in other industries face similar burdens. For example, Square has created a credit card reader for mobile devices. Small businesses love Square because it reduces costs and is convenient for customers. But some states want a piece of the action. Illinois, for example, has ordered Square to stop doing business in the Land of Lincoln until it gets a money transmitter license, even though the money flows through existing payment networks when Square processes credit cards. If Square had to get licenses in the 47 states with such laws, it could cost nearly half a million dollars, an extraordinary expense for a fledgling company.

Obstacles to entrepreneurship aren’t limited to the tech world. Across the country, restaurant associations have tried to kick food trucks off the streets. Auto dealers have used franchise laws to prevent car company Tesla from cutting out the middleman and selling directly to customers. Professional boards, too, often fiercely defend the status quo, impeding telemedicine by requiring state-by-state licensing or in-person consultations and even restricting who can sell tooth-whitening services.

Smart libertarians often point out that complex government regulations are essentially a barrier to entry for small companies. Big corporations may complain, but in a lot of cases it’s just kabuki: they have the legal support staff to comply with the new rules, and they know that small competitors don’t. In the end, the regulations often work in their favor.

It’s not always easy to tell which regs are genuine and which ones are mostly just fronts for established incumbents. Then again, sometimes it is, and the rules against Uber and its competitors are pretty obviously the latter. California’s big cities should get the message and do what’s right for their residents, not the taxi lobbyists who donate to their reelection campaigns.