Up until a few years ago, figuring out your college football team’s schedule was easy. A week—or a month—before the season started, you’d just look it up. But then things changed. These days, if you’re looking for something to stick on your refrigerator door before the start of the season, you’ll find the schedule still in flux, with 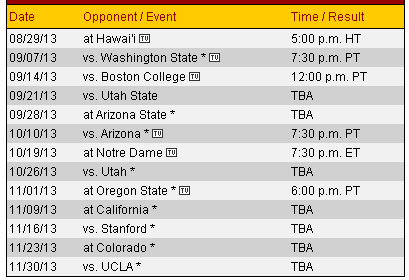 no kickoff time and no TV station listed for half the games. So what happened? The New York Times explains today:

The extent of ESPN’s influence over college football is literally displayed on the face of your ticket to next week’s game. Tickets to most games are printed with the date and the opponent’s name, but something is missing: the kickoff time. That is because ESPN, under its contracts with conferences, has the right to set kickoff times and wait until 12 days before game day, or in some cases only six, to inform universities.

Every Monday morning during the season, ESPN’s football brain trust meets in a war room in Building 12 on the network’s sprawling campus in Bristol, Conn., to consider options for upcoming games and make sure the hottest teams get the choicest time slots on each of its channels. After decisions are made, calls go out across the country, setting off a scramble on dozens of campuses as universities arrange everything from parking to security to team transportation.

….One of the most powerful people in the business of college football is a boyish, unassuming graduate of the University of Southern California named Ilan Ben-Hanan. His title is vice president of programming and acquisitions for college football at ESPN. What he really is, though, is the network’s master scheduler….Much of the schedule, of course, is determined by the colleges and conferences themselves. What’s more, ESPN’s contracts with conferences contain a variety of scheduling stipulations. Even so, the billions of dollars that ESPN pays for television rights allow it, in some cases, to decide what time games are played and to have a say in who plays whom and when.

Mr. Ben-Hanan’s mission, which embodies one of the central alchemies of ESPN, is to take all that information, what is set in stone and what is not, and create on-screen events as the season approaches and then unspools, week after week…..The network’s right to wait until as few as six days in advance before announcing which games it will show, and at what times, encompasses all but the first three weeks of the season, when game times are set far in advance.

So there you have it. The reason I don’t know the kickoff time for all of USC’s games this season is because of a USC graduate. And money, of course. Always money.

BY THE WAY: If you consider college football little better than satanic mills for the 21st century, consider this your thread to vent. Lately, I’m starting to agree with you anyway.