Today’s Fox Butterfield Award goes to the New York Times, whose story on the ruling includes this: “These stop-and-frisk episodes, which soared in number over the last decade as crime continued to decline . . .”

I do not endorse, nor should any police officer endorse, extra-constitutional means to achieve law-enforcement ends, no matter how noble. But in the Bronx, a week ago Sunday, an NYPD officer shot and killed 14-year-old Shaaliver Douse as he, Douse, was attempting to shoot some rival gang member. Would it not be preferable that the police had stopped and frisked Douse 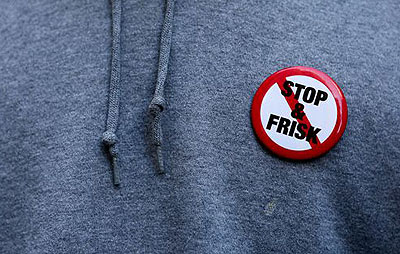 before his crime than shot him after?

….Liberals, especially those who would never dare set foot in the Bronx, can rejoice at Judge Scheindlin’s ruling, then watch the bodies begin to pile up.

Dunphy obviously thinks the Times is being ridiculous: Crime is going down because of stop-and-frisk, so it takes some serious chutzpah to suggest that this is a good reason to end it. It’s similar to liberal complaints about the Supreme Court’s decision gutting the Voting Rights Act: How can you cite reduced voting discrimination as a reason that we no longer need the VRA when it’s the VRA itself that was responsible for reduced voting discrimination?

Now, as it happens, Judge Scheindlin didn’t ban stop-and-frisk. Pretty much every police department in the country does it in one form or another. She merely concluded that New York City had gone too far and turned it into de facto racial profiling. But Dunphy’s comment illustrates why evidence is so important here, and in particular why I think the lead-crime link is worth further study even if most environmental lead is already gone and there’s little chance of getting funding to clean up the rest.

If stop-and-frisk really is the reason crime has dropped so dramatically in the Bronx, then a judge would be justified in weighing this against the legal issues on the other side. Even decisions based on fundamental constitutional rights aren’t rendered in a vacuum. But if reductions in atmospheric lead are the primary reason for the drop in crime, then stop-and-frisk really has no justification at all, and the judge’s decision becomes an easy one. That’s why it’s worth getting a more definitive answer about this. Other cities have seen dramatic crime drops without expanding their stop-and-frisk programs as aggressively as New York, and it would sure be worthwhile to find out how and why that happened.