A few months ago I passed along the story of Barrett Brown, a young journalist/activist who relentlessly followed up on documents leaked by Anonymous, was targeted for this by the FBI, and who was eventually harassed enough that he cracked—which took the unfortunate form of recording a YouTube rant promising to “destroy” one of his tormentors.

Brown was indicted for posting the YouTube threats, and there’s no question that it was an ill-advised rant regardless of the FBI instigation. But David Carr follows up with more today. It turns out that only three of the charges against 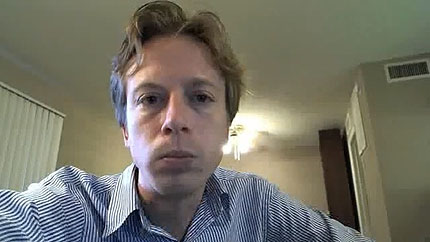 In December 2011, approximately five million e-mails from Stratfor Global Intelligence, an intelligence contractor, were hacked by Anonymous and posted on WikiLeaks. The files contained revelations about close and perhaps inappropriate ties between government security agencies and private contractors. In a chat room for Project PM, Mr. Brown posted a link to it.

Among the millions of Stratfor files were data containing credit cards and security codes, part of the vast trove of internal company documents….According to one of the indictments, by linking to the files, Mr. Brown “provided access to data stolen from company Stratfor Global Intelligence to include in excess of 5,000 credit card account numbers, the card holders’ identification information, and the authentication features for the credit cards.”

….But keep in mind that no one has accused Mr. Brown of playing a role in the actual stealing of the data, only of posting a link to the trove of documents….“The YouTube video was a mistake, a big one,” said Gregg Housh, a friend of Mr. Brown’s who first introduced him to the activities of Anonymous. “But it is important to remember that the majority of the 105 years he faces are the result of linking to a file. He did not and has not hacked anything, and the link he posted has been posted by many, many other news organizations.”

This is almost a textbook case of prosecutorial overreach. As Carr points out, the guy who actually stole the Stratfor information is facing a sentence of only ten years. So why is Brown facing 105 years? Certainly not for a video posted while he was in withdrawal from heroin addiction. More likely, it’s because the government considers him a thorn in their side and wants to send a message to anyone else planning to follow in Brown’s footsteps. That just ain’t right. As Carr says, “Punishment needs to fit the crime and in this instance, much of what has Mr. Brown staring at a century behind bars seems on the right side of the law, beginning with the First Amendment of the Constitution.”