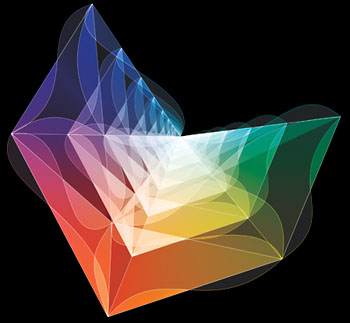 Via Alex Tabarrok, Quanta magazine reports on a decades-long effort that has recently produced a radically simplified way of calculating quantum interactions. Instead of adding up millions or billions of terms, you simply sum the volumes of the pieces of a multi-dimensional jewel-like object called a “positive Grassmannian.” Its inventors call this object an amplituhedron:

The amplituhedron is not built out of space-time and probabilities; these properties merely arise as consequences of the jewel’s geometry….Encoded in its volume are the most basic features of reality that can be calculated, “scattering amplitudes,” which represent the likelihood that a certain set of particles will turn into certain other particles upon colliding.

….The 60-year-old method for calculating scattering amplitudes — a major innovation at the time — was pioneered by the Nobel Prize-winning physicist Richard Feynman….“The number of Feynman diagrams is so explosively large that even computations of really simple processes weren’t done until the age of computers,” Bourjaily said….In 1986, it became apparent that Feynman’s apparatus was a Rube Goldberg machine.

….Arkani-Hamed and Trnka discovered that the scattering amplitude equals the volume of a brand-new mathematical object — the amplituhedron. The details of a particular scattering process dictate the dimensionality and facets of the corresponding amplituhedron. The pieces of the positive Grassmannian that were being calculated with twistor diagrams and then added together by hand were building blocks that fit together inside this jewel, just as triangles fit together to form a polygon.

….“They are very powerful calculational techniques, but they are also incredibly suggestive,” Skinner said. “They suggest that thinking in terms of space-time was not the right way of going about this.”

Hey, who needs space and time anyway? Jewels are the heart of the universe, just like the new-agers have been telling us.

Ahem. Anyway, read the whole piece if you enjoy this kind of thing. Aside from making calculations easier, it’s possible that the nature of the amplituhedron will provide new insights into what the fundamental laws of the universe really are. Or it might turn out to be a red herring. Who knows? But the details are a helluva lot more interesting than whatever childish machinations are the flavor of the day in the House Republican caucus.