Via Andrew Sullivan, today brings news that auto body shops discriminate against people with disabilities. John List and Uri Gneezy recruited a group of men to get quotes for fixing a small ding in the side, and it turns out that if the men were in wheelchairs they got quotes that were about 30 percent higher. However, if the 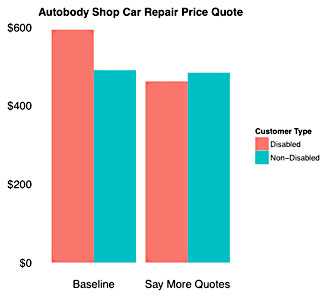 recruits mentioned that they were getting three quotes that day, everyone got about the same price. So what’s this all about?

It turned out that mechanics were just making an economic calculation when they gave out price quotes. Put differently they were engaging in classic, blatantly unfair, economic discrimination by taking advantage of a customer’s disability. Luckily, policymakers may already have the solution for this sort of discrimination in place. The Americans with Disabilities Act has forced businesses to facilitate easy access for the disabled, making a task like obtaining multiple quotes possible. Now we just need to make it predictable enough for mechanics to catch up.

Hmmm. If I’m reading this right, the authors are suggesting that the body shop guys took a look at the folks in the wheelchairs and figured that they probably wouldn’t drive around to get multiple quotes because they were disabled. So the body shop guys thought they could get away with padding their quotes a bit. I’m not sure I have a better explanation for this,1 but I’m still a little skeptical. These were all folks who drove to the auto shop. Why would the mechanics figure that someone in a wheelchair wouldn’t be willing to drive to three repair shops?

I don’t suppose I have any readers who have worked in a body shop, do I? Is there some kind of ancient lore among repair shops that folks in wheelchairs are less likely to get multiple quotes? This is a bit of a curiosity.

1Actually, I might. Someone should school me if I’m wrong about this, but I suspect that a lot of people assume (either consciously or otherwise) that people with physical disabilities are also a little bit mentally disabled. This might be because people with mental disabilities often have poor body control, so the association gets made without even thinking about it. If this is the case, the higher quotes might have nothing to do with mobility per se. It might be because the repair shop folks just assumed that the guys in wheelchairs had a little less on the ball than the non-disabled customers.