In today’s most fascinating inside baseball reporting, Robert Costa tells us that the biggest personality clash in DC right now isn’t between Obama and Boehner or Obama and McConnell. It’s not between Obama and anybody. It’s between Boehner and Harry Reid. Quite simply, they loathe each other, a feeling that was amplified today when Reid’s chief of staff decided to give Politico a bunch of embarrassing emails showing that Boehner had been desperately trying for months to save the healthcare subsidies for congressional staffers that he’s now publicly demagoguing as “special treatment” for Congress.

Obviously Reid’s chief of staff did this with the blessing of his boss, and afterward he twisted the knife further by giving an interview about the whole thing to National Review. “I took the action I did,” he said in a statement, “because I refuse to stand by and watch those who pressed for this ruling turn around and attack the very thing they 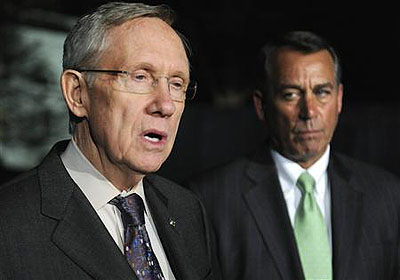 asked for, simply because they don’t have the courage to stand up to a few whiners in their caucus. Integrity means owning in public what you advocate for in private.”

Via Twitter, Costa reminds us that after the failed fiscal cliff negotiations late last year, the tea party caucus demanded that Boehner never again negotiate one-on-one with Obama. He complied. “Now, this seems like a small thing. But over past yr it has made Boehner and Obama unable to truly cut deals….So, into this vacuum that Boehner leaves in early ’13 strolls… the senior staffers.” Costa explains what this all means:

Reid and Boehner are the two people responsible for eventually brokering some kind of deal—and as gov’t shuts, their staffers are at war….So, in tmw’s papers you will read abt failed House votes and small CRs. But the real buzz today was bicameral bloodbath post Politico story

It’s the small story that’s a huge story. It’s not that Reid and GOP ldrshp disagree; they priv and pub detest each other

All of this reminds me: talk of “clean CR” is surreal when u peel back curtain a bit. Entrenched msg’ing battles, deeply personal sniping….now, a Democratic aide has sent me copies of email exchanges btwn Boehner’s CoS and Reid’s CoS, as means of illuminating [Politico] story

What’s notable: this isn’t abt Obama for most Hill folks involved. He’s non-essential. It’s part of brutal, long war btwn Reid & House GOP….The Boehner-Reid relationship may be most overlooked in DC. Too often focus is Boehner-O, or O-Dems, etc.