I’ve mentioned before that Obamacare’s rollout problems really are all about the website. Rate shock and network shock may be real problems for some people, but they aren’t deal breakers and they aren’t as serious or as widespread as Fox News is trying to make them 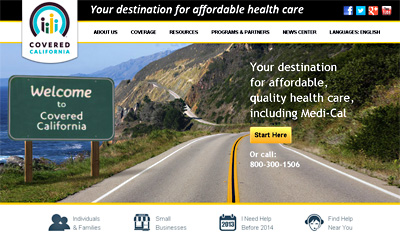 out to be. Fix the website and Obamacare will be in pretty good shape.

Paul Krugman produces some pretty good evidence for this today: California. It is, he says, an excellent test case:

First of all, it’s huge: if a system can work for 38 million people, it can work for America as a whole. Also, it’s hard to argue that California has had any special advantages….[It] came into health reform with 22 percent of its nonelderly population uninsured, compared with a national average of 18 percent.

Finally, the California authorities have been especially forthcoming with data tracking the progress of enrollment. And the numbers are increasingly encouraging.

For one thing, enrollment is surging. At this point, more than 10,000 applications are being completed per day, putting the state well on track to meet its overall targets for 2014 coverage….Equally important is the information on who is enrolling. To work as planned, health reform has to produce a balanced risk pool — that is, it must sign up young, healthy Americans as well as their older, less healthy compatriots. And so far, so good: in October, 22.5 percent of California enrollees were between the ages of 18 and 34, slightly above that group’s share of the population.

What we have in California, then, is a proof of concept. Yes, Obamacare is workable — in fact, done right, it works just fine.

I’d add that California is hardly anyone’s idea of the most efficient bureaucracy in the country. During the aughts, for example, California spent a quarter billion dollars trying to build a new payroll system and failed utterly. In Los Angeles, a $100 million DWP billing system has been an epic disaster. California knows how to screw up IT projects.

So the fact that our implementation of Obamacare is working pretty well means that it doesn’t require a team of programming supergeniuses to get it off the ground. All it requires are decent coding and project management skills. Krugman is right: If California can do it, so can the federal government.