A couple of days ago I wrote about Social Security MINT projections, which suggest that retiree income will continue on a fairly steady upward path for the next few decades. “It suggests that we don’t really face a historic retirement crisis,” I said.

Dean Baker has a response up today, which I’ll respond to in more detail later. I agree in part and dissent in part with what he says. For now, though, I just want to do two things. First, call attention to his post so you can go read his objections. Second, I want to make a point about “replacement rates” that’s subtle enough (and lengthy enough) to require a post of its own.

As both Baker and I point out, the MINT projection suggests that future retirees will be better off than current retirees in absolute dollar terms (adjusted for inflation, of course), but will have lower income replacement rates. In particular, MINT projects that past retirees, on average, received 95 percent of their working-age income. Future retirees will receive only 84 percent. What’s going on?

Part of the answer has to do with stagnant wages. In the past, wage growth was strong, so workers could expect to see their incomes grow strongly throughout their lifetimes (again, adjusted for inflation). More recently, wage growth has been weak. Incomes still rise over a worker’s lifetime, but not as much. 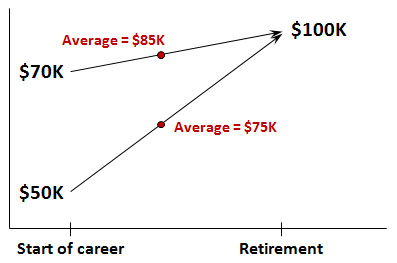 It seems like our second worker has gotten the shaft. But did she? Both workers ended their careers making the same amount of money, and both are receiving the same retirement income. The difference in replacement rates is more a statistical artifact than a meaningful number.

Now, you can draw different conclusions from all this. It’s just raw data. But I want to make the point that replacement rates can be tricky things. In many cases, I think they tell us less about retirement income per se, and more about the fact that working-age incomes have suffered from sluggish growth over the past four decades. My underlying concern in this conversation has always been to wrest liberal attention away from retirees, who I think are doing relatively well, and keep it focused like a laser on rising income inequality and sluggish wage growth among middle-class workers.

In a sense, this is more a matter of emphasis than real dispute, since I doubt that Baker seriously disagrees here. But I do think the emphasis is important. It’s a thriving and vibrant middle class—and by this I mean the working-age middle class—that’s truly critical to a healthy modern democracy. If we get that, everything else will follow. I’ll have more to say about this later.