Nobody asked me for my favorite chart of the year, which is too bad. Because I actually have one. It’s the chart from my austerity piece a couple of months ago that shows how government spending has plummeted during the current recovery, something that’s never happened before. If you want to understand the weakness of our economic recovery over the past five years, it tells about 90 percent of the story.

But there are other versions of the same chart. Matt O’Brien has one today that shows government employment during every recession since World War II. As you can see, only 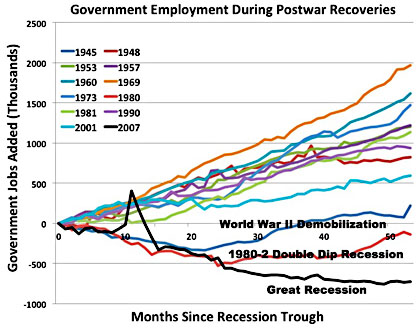 two others have featured employment declines of any kind, and our current recovery features the biggest decline of all:

As Ben Bernanke put it, “people don’t appreciate how tight fiscal policy has been.” And how much that’s knee-capped the economy. Take jobs. Bernanke points out that total public sector employment—local, state, and federal—has fallen by over 600,000 during the recovery alone. As point of comparison, it rose by 400,000 during the previous one.

How is it possible that government added more jobs after World War II demobilization than now? Or after the 1980 recession, which was followed by another recession a year later? Well, it’s what Paul Krugman calls the 50 Herbert Hoovers effect….Like Hoover in the 1930s, [states] tried to balance their books amidst a depressed economy. And like Hoover in the 1930s, it didn’t work out too well. They went on a cops-and-teachers firing spree the likes of which we’ve never seen before. And one that was the difference between unemployment being 6 instead of 7 percent today.

The greatest trick austerians ever pulled was convincing people that it was stimulus that had failed.

It was a great trick, and they did it by focusing attention like a laser on the federal government. If you do that, spending and employment don’t look too bad. But if you look at the big picture, the modest federal stimulus we enacted never came close to making up for the brutal austerity at the state and local level. It’s the same trick conservatives use when they moan about tax rates hitting the rich too hard: They look solely at the federal income tax, which is fairly progressive. But they studiously ignore all the other taxes that make our system look a whole lot flatter.

The plain truth is that stimulus never failed. As Bernanke says, we never really had any serious stimulus. Sure, the little bit we got helped, but if we’d had a Congress that actually cared more about the economy than it did about the next election, we’d be in a whole lot better shape today than we are.