Over at the Economix blog, minimum wage skeptic David Neumark makes a reasonable point: sure, adjusted for inflation, the minimum wage has declined since the 1960s. But we’ve created and then expanded the EITC as a wage support tool since then, so you need to look at the two together. If you do that, wage support for low-income families looks a lot better.

Like I said, it’s a reasonable point. The problem is that Neumark appears to use the statutory EITC amount in his calculations. In the case of the minimum wage, using statutory amounts is OK since it’s a universal policy. But for EITC, you really want to look at actual average benefits and how they’ve changed over time.

This is very, very difficult. Or, to put it more bluntly, it was too difficult for me, and I couldn’t find any authoritative measure of this. However, by cobbling together a few different sources and making some (hopefully reasonable) assumptions about average hours worked and so forth, I took a crack at estimating the value of the EITC converted into hourly wages. The CBPP, for example, says that the average EITC for a family with children was $2,805 in 2010. Nearly all of this goes to families in the bottom quintile with wages under $20,000, which means it goes to workers who are probably making the minimum wage or only slightly more. Some of those families have a single earner working 2,000 hours per year. Some work less. Some families have multiple earners working more than 2,000 hours together. But if you use 2,000 hours as a horseback guess, the average EITC payment comes to about $1.40 per hour worked.

I can’t emphasize enough how rough this is. But I doubt it’s off by a huge margin. Putting this together with a bit of other data, here’s what it produces: 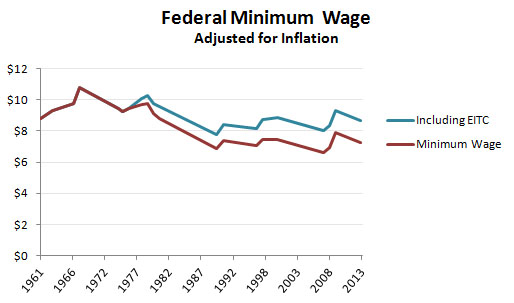 If there’s better data bearing on this point, I’m happy to post about it. For now, though, my best guess is that even when you account for the EITC, income support for poor families remains a couple of dollars per hour below its 1960s level.

My personal policy preference is to divide income support between the EITC and the minimum wage. They address different problems and they have different targets (the EITC, for example, is heavily targeted toward families with children, while the minimum wage is universal). Although Neumark is not a fan of increasing the minimum wage, he suggests this is a reasonable policy choice:

Although Neumark disagrees, my reading of the literature as a whole suggests that the adverse employment effects are very small, even on the groups most strongly affected by a higher minimum wage. That said, if anyone wants to propose a significant expansion of EITC instead of an increase in the minimum wage, I’m all ears. Generally speaking, though, I’m in favor of guaranteeing a certain minimum compensation to everyone, not just families with children. For that reason, I’d like to see the minimum wage increased.