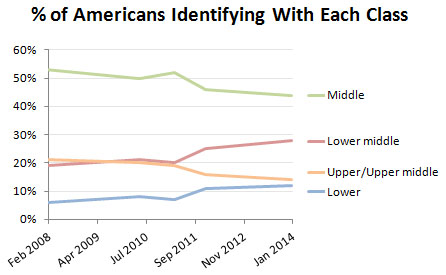 Pew Research has a new poll out tracking how many people call themselves middle class vs. some other class. The chart on the right shows the basic results over the past few years.

I’m trying to figure out what to think of this. If you actually take a close look at the numbers, it turns out that of the people who identified as middle class in 2008, nearly a third of them now identify as lower middle or lower class.1 And as dramatic as that sounds, it’s actually even more dramatic than those bare words suggest. Class self-identification is deeply tied up with culture, not just income, and this decline means that a lot of people—about one in six Americans—now think of themselves as not just suffering an income drop, but suffering an income drop they consider permanent. Permanent enough that they now live in a different neighborhood, associate with different friends, and apparently consider themselves part of a different culture than they did just six years ago.

I’m going to repeat that: A third of the people who identified as middle class in 2008 now identify as lower middle or lower class. And that happened in a mere six years. Paul Krugman suggests that there’s a silver lining here: “Conservatives claiming that character defects are the source of poverty, and that poverty programs are bad because they make life too easy, are now talking to an audience with large numbers of Not Those People who realize that they are among those who sometimes need help from the safety net.” This in turn means that these people, even in red states and counties, will start supporting safety net programs in large numbers. Maybe. But here’s a friend arguing that in a lot of places, there’s just a lot more going on:

West Virginia is a great example. That state is mostly blue collar to dirt poor. But politics is an amazing thing. I have old childhood friends who are out of work or between jobs, or have kids with special needs who are going up on Facebook every day with brutal takedowns of Obamacare. And they’re preaching to a choir there. Every day. I have no doubt that some of them have taken advantage of the law. They’re not stupid. But they are rabidly partisan and they have no scruples about savaging anything with a D next to it.

In other words, more people might be using the safety net, but that doesn’t always mean more people support the safety net. I suspect that’s right—for now, anyway. A change in class self-identification is only the first step toward a deeper change in cultural and tribal ties. But if the economy turns south again sometime in the next couple years, those deeper ties might fray as well.

1Wondering where I came up with this? Here’s how, based on data from Question 52 in the survey: