USA Today’s media columnist, Rem Rieder, is tired of the rest of us tacking gate onto the end of every conceivable scandal. Here’s his argument:

I will give it knee-jerk. And lazy. And oh, so predictable. 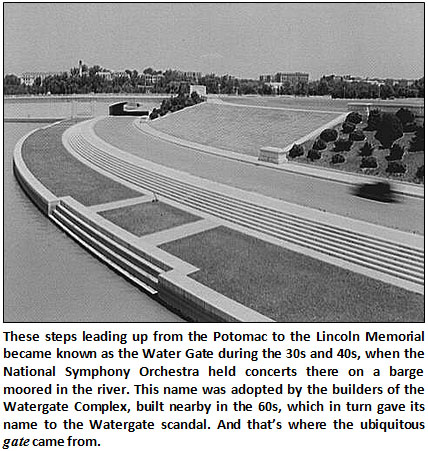 But it’s not supposed to be cute, cool, or clever. It’s supposed to be knee-jerk, lazy, and predictable—or, as the rest of us refer to this quality, instantly recognizable. Tomato, tomahto, my friend.

Perhaps recognizing the tenuousness of his case, Rieder adds this:

But there is a more serious reason to show gate to the gate. By awarding the suffix to everything from serious government misconduct to the exposure of Janet Jackson’s breast during the halftime show of Super Bowl XXXVIII (surely you remember Nipplegate), you create a false equivalency that ends up trivializing everything.

That certainly was the take of Sam Dash, who served as chief counsel to the Senate Watergate Committee all those years ago. “When people hear this proliferation of ‘gates,’ they feel the press is telling them this is the same as Watergate, and whatever Watergate has stood for has lost its meaning,” Dash told Suzan Revah of American Journalism Review.

I dunno. We’ve been slapping gate on the end of things for 40 years now, and Richard Nixon’s notoriety remains safe. So I don’t really think this argument holds water. Besides, gate actually has a very specific meaning. Watergate was the first big example of scandal as public spectacle during the media age, and because of this gate is generally reserved for spectacles large and small. But it’s not used for things that go beyond the realm of political spectacle. There’s no such thing as Benghazi-gate because that was a tragedy in which people died. Likewise, there’s no Surveillance-gate or Waco-gate. Its use is actually surprisingly specialized.

Still, what if we did all get tired of gate? What would we replace it with? It would be even more boring to just call all these things scandals, and that wouldn’t clearly identify them anyway. But maybe we could poach some other scandal-related suffix? What options do we have? Teapot Dome. Crédit Mobilier. The Plame Affair. Iran-Contra. The XYZ Affair. The Keating Five. Chappaquiddick. The vicuna coat. Let’s try these out to see how they sound as a replacement for Bridgegate:

It’s hopeless. Teapot Dome is the only one that works—though I’ll confess that Bridgexyz has certain possibilities depending on how you pronounce it. So that’s that. We either keep using gate or else switch to dome. I think we’re better off sticking with gate.