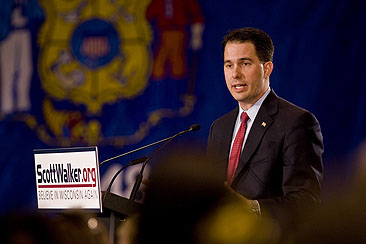 First there was Bridgegate. Now we have another gate. But what to call it? Routergate? Emailgate?

Let’s go with Routergate for now. After all, when was the last time a secretly installed router got a scandal named after it? In this case, the secret router belonged to Scott Walker’s office staff back when he was Milwaukee County executive. This secret router was used to host a secret email system that his staff used to run his 2010 campaign for governor, which is something of a no-no since public employees aren’t supposed to be running the boss’s campaign during business hours.

Up to now, Walker has managed to keep his fingerprints away from all this, refusing to even say whether he knew the secret email system existed. Today, however, a huge cache of emails from the system was released, and this was one of them:

“Consider yourself now in the ‘inner circle,'” Walker’s administration director, Cynthia Archer, wrote to Walker aide Kelly Rindfleisch just after the two exchanged a test message. “I use this private account quite a bit to communicate with SKW and Nardelli.“

SKW would be Scott Kevin Walker, who apparently received “quite a bit” of campaign email from these secret accounts. Does this mean he knew about the secret router? Does it mean he knew it was being used to conduct campaign business during working hours? No it doesn’t. But it sure points in that direction. From the Washington Post:

Walker has characterized the activities as wayward behavior of low-level aides. But the e-mails show that he knew county officials were working closely with campaign officials. Walker, for instance, directed his county staff members and campaign aides to hold a daily conference call to coordinate strategy, the documents show.

He routinely used a campaign e-mail account to communicate with county staff members, who also used private accounts, the documents show. Prosecutors have said the approach was used to shield political business from public scrutiny.

That sounds familiar, doesn’t it? In any case, a bunch of those low-level aides have already been convicted of campaign misconduct, but not Walker. He’s managed to maintain plausible deniability, and that’s unlikely to change. But for what it’s worth, Charles Pierce thinks that Walker’s shenanigans are eventually going to catch up to him:

If you like the grandiose and unfolding corruption in New Jersey under Chris Christie, you’re going to love the penny-ante thievery in Wisconsin under Scott Walker.

His entire political career has been marked by one laughably cheap scam or another. His first campaign has an impressive body count; former aides went to jail for using his office as Milwaukee County Executive to campaign for him for governor. He also has a absolute gift for surrounding himself with people who have interesting notions of public service. My favorite is still Ken Kavanaugh, who was convicted for literally robbing money from widows and orphans, and for pillaging a fund dedicated to taking the children of American soldiers killed in action to the zoo….And now there’s a special prosecutor looking into possible illegalities in the campaign through which Walker fought off a recall effort.

Walker is running for reelection this year, and you can be sure that Democrats will be doing their best to make hay with the latest investigation, which involves allegations that Walker illegally coordinated his 2012 anti-recall campaign with “independent” conservative groups.

None of this is likely to damage Walker very badly. Campaign misconduct just doesn’t bother people much. Still, you have to figure that where there’s smoke, there’s fire. If Walker is the kind of guy to do all this stuff, he might also be the kind of guy to go a step or two further someday and forget to cover his tracks. Stay tuned.