Last month, we1 told you about the crackpot congressional candidacy of Virginia’s Dick Black. A week later we told you he had dropped out of the race. That didn’t take long! Black tried to put a heroic spin on his withdrawal (it was to prevent Democrats from gaining a majority in the Virginia state senate), but the truth was more prosaic: everyone was against him. The Chamber of Commerce. The party leadership. Even the Koch Brothers.

In other words, it wasn’t just the Republican “establishment” that was opposed to Black. It was also tea-partyish groups like the Koch-funded American for Prosperity. 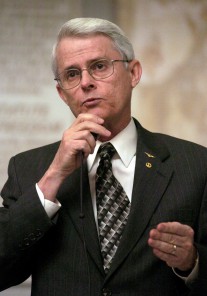 But why? Dave Weigel explains:

Why did [AFP] join the blanket party against Black? Because Black was going to make social conservative gaffes. And that element of the party, not a huge problem in office, causes problems during campaigns.

That’s what “stopping the next Todd Akin” means. It doesn’t mean crushing the Tea Party or electing moderates. Akin was not the Tea Party candidate in Missouri’s 2012 primary—national Tea Party groups endorsed either the former state treasurer or a businessman who was making his first ever political run. Akin was a social conservative who went on to bungle his abortion views in an easy interview. And everyone on the right, from the RNC to the pro-life Susan B. Anthony List, has been working to train Republicans to avoid sounding like Akin. Not changing what they stand for.

The Republican Party isn’t trying to move to the center. It’s just trying to prevent abject idiots from running for Congress, especially in red hot media markets like Northern Virginia, which command the attention of every political reporter in the country. When you start babbling about spousal rape in a town hall in West Bumcluck, you might pull it off with no one noticing. But if you do it in NoVa, it won’t just be Mother Jones that notices. Everyone will notice. And let’s face it: Republicans have no greater challenge these days than fooling moderates into thinking that the party isn’t controlled by a flock of raging fanatics. Getting rid of embarrassments like Dick Black is all part of the plan.

1Meaning Mother Jones. It was Molly Redden who reported these stories, not me.