In 1997, in an effort to rein in rising Medicare spending, Congress created a formula for paying doctors called the “sustainable growth rate” (SGR). Unfortunately, a few years later, this formula started calling not for sustainable growth, but for actual pay cuts. Doctors went ballistic, and Congress hastily passed a “doc fix” that deferred the scheduled cuts. Then they did the same thing the next year, and the year after that—and then in every year since then. At this point, the SGR is obviously deader than the proverbial doornail, but officially killing it would also officially count as a spending increase, which would officially increase the deficit by a lot. Nobody wants to face up 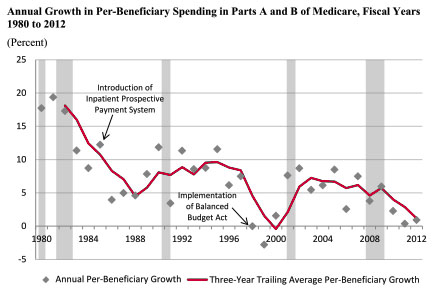 to that, so every year Congress just passes a temporary extension to the doc fix and calls it a day.

But wait! In a rare display of constructive bipartisanship, Congress might actually do something about this. Sarah Kliff explains:

The problem with the sustainable growth rate is it isn’t sustainable at all….But because the doc-fix could cost as much as $300 billion to fix, legislators have stuck with [] short-term patches, which cost significantly less and are a whole lot easier to find offsets to pay for. The math changed this year, however, as health care cost growth has slowed, and the Congressional Budget Office has essentially cut in half the amount it thinks fixing the doc-fix would cost. Now, the CBO says it will cost $153 billion to repeal the sustainable growth rate, and legislators see that lower price tag as making it easier — although by no means certain — to pass legislation.

The proposal released Thursday is a thorough outline of the policies that would replace the doc-fix. What Congress wants to do differently this time around is, by 2021, put as much as nine percent of doctors’ reimbursements at stake if providers can’t hit certain quality standards. It would also include a bonus pool of $500 million for the doctors who do provide really great care.

This is no slam dunk. Congress still has to find $153 billion in offsets, after all. And it’s certainly possible to put a cynical spin on this: there’s no money available for the long-term unemployed, but for doctors? No problem! But I’d be less cynical. After all, it’s not as if doctors won’t get their current pay rates one way or another. This is just a matter of facing up to reality and admitting that SGR didn’t work and never will. That’s basic good governance, and we can use all of that we can get.