Does high income inequality lead to lower economic growth? There are two main reasons to think it might. The first is simple: rich people spend a smaller percentage of their income than the non-rich. Thus, as more and more income accrues to the rich, we get less net consumption and thus slower growth.

The evidence on this score turns out to be pretty hazy. It seems logical, but if you look at consumption trends over time you just don’t see it. But there’s a second theory that’s more interesting: as inequality rises, the rich increasingly need to find good places to invest all the money they’re accumulating. Eventually concrete business opportunities start to become scarce, so they look around for other places to put their money to work. In practice, this means the rich become net lenders to the middle class. They can hardly be loaning money to each other, after all, since they all have more of it than they can use for current consumption.

So the rich lend money to the middle class, which is an eager recipient because their incomes are stagnant. But as the debt load of the middle class increases, this lending becomes ever more Byzantine and ever more risky. Eventually, the middle class simply can’t take on more debt and the whole system comes to a screeching halt. The result is 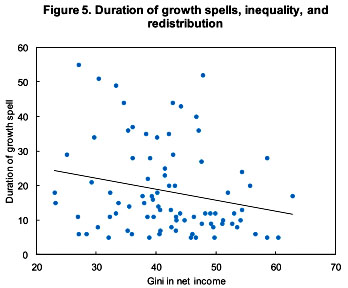 an economic recession as consumers try to work themselves out from under the mountain of debt they’ve run up.

There’s an intriguing amount of evidence to back up this theory, and in a new report released yesterday a team of IMF researchers provides another reason to believe it. They find that high inequality is indeed associated with slower growth, but the mechanism for that slower growth comes in reduced growth spells. That is, it’s not that countries with high inequality have steady growth rates that happen to be a little lower than countries with low inequality. Rather, they have shorter spells of economic expansion. In particular, the authors find that a 1-point increase in a country’s GINI score (a measure of inequality) is associated with a decrease of about 7 percent in the length of its growth spells.

In other words, countries with high inequality simply can’t maintain economic booms as long as countries with lower inequality. This is consistent with the idea that growth in these countries is driven partly by the rich loaning money to the middle class, which is obviously less sustainable than growth driven by an increase in middle-class wages. In high-inequality countries, growth is too dependent on financialization and leverage. When the merry-go-round stops, as it inevitably must, the boom times are over.

The IMF team also found that—within reason—redistribution doesn’t seem to harm growth. In fact, just the opposite: “The combined direct and indirect effects of redistribution—including the growth effects of the resulting lower inequality—are on average pro-growth.”

To pick up on the theme of the previous post, this is something we all understood back in the era when unions were powerful advocates for the middle class. Of course rising middle-class wages are a prerequisite for sustainable growth in a mixed consumer economy like ours. And the more stagnant those wages are—and the aughts were by far the worst decade for stagnant wages since World War II—the more fragile economic growth is.

Now we have an IMF report to add to the technical evidence that middle-class wage stagnation is bad for the economy. But who has the raw political power to force the business community to listen to it?