Matt Steinglass ruminates on the proto-civil war that’s broken out in Ukraine:

What can Americans do with this conflict that it cannot win? The most useful thing, I think, is to use it to understand the nature of the threat to freedom we’re seeing these days, in Ukraine and around the world. Viktor Yanukovich is a democratically elected president who has used his powers to eliminate liberal-rights safeguards and jail political opponents on dubious charges. He has reinforced his political position by building cronyistic relationships with powerful business figures. In this system the state creates economic rents and awards them to favoured 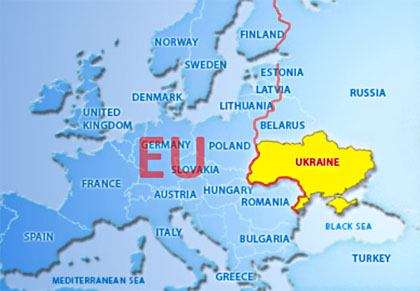 business interests, who in turn buttress the state’s political power, all while maintaining the trappings of democracy.

In other words, Ukraine looks a lot like Russia or Egypt; more significantly, it looks like other states that are in the early stages of similar threats to liberal democracy, such as Turkey and Hungary. The enemy of liberal democracy today is more often kleptocracy, or “illiberal democracy” (as tiger-mom Amy Chua put it in her book “World on Fire”), than ideological totalitarianism. The threat is less obvious than in the days of single-party states and military dictators. But it ends up in the same place: economic stagnation, a corrupt elite of businessmen and politicians, censored media, and riot police shooting demonstrators.

It is not clear that America has the political appetite to do much more than watch and deplore what’s happening in Kiev. It is not clear that the country could accomplish much anyway….So we are left watching the latest in a years-long string of depressing, violent reversals of democracy around the world, from the defeat of the green protests in Iran to the failure of Egypt’s peaceful democratic revolution and the endless succession of red-yellow street battles in Bangkok. The crackdown in Kiev is perhaps the most depressing of all: the memory of the 2004 Orange Revolution drives home the point that peaceful democratic transitions often don’t stick, and that the spread of the zone of liberal democracy is not inevitable. The most we can do is recognise what the threat to freedom looks like today, impose sanctions, offer asylum to political refugees and make it perfectly clear where we stand, however ineffectually.