Here is Ronald Reagan on October 27, 1983, explaining his decision to invade Grenada in a nationally televised address:

[Earlier this month, Prime Minister Maurice] Bishop was seized. He and several members of his cabinet were subsequently executed, and a 24-hour shoot-to-kill curfew was put in effect. Grenada was without a government, its only authority 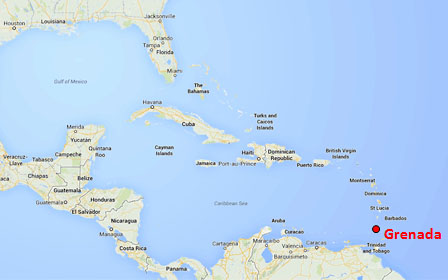 exercised by a self-proclaimed band of military men.

There were then about 1,000 of our citizens on Grenada, 800 of them students in St. George’s University Medical School. Concerned that they’d be harmed or held as hostages, I ordered a flotilla of ships, then on its way to Lebanon with marines, part of our regular rotation program, to circle south on a course that would put them somewhere in the vicinity of Grenada in case there should be a need to evacuate our people.

Last weekend, I was awakened in the early morning hours and told that six members of the Organization of Eastern Caribbean States, joined by Jamaica and Barbados, had sent an urgent request that we join them in a military operation to restore order and democracy to Grenada….These small, peaceful nations needed our help. Three of them don’t have armies at all, and the others have very limited forces. The legitimacy of their request, plus my own concern for our citizens, dictated my decision.

Shorter Reagan: the government of Grenada was in chaos; Americans were in danger; and nearby governments requested our help. So we sent in troops. Does this sound at all familiar?

As it happens, there was little evidence that any Americans were in danger, and the nearby governments had asked for help largely because Reagan had requested it. The real reason for the invasion was that Grenada was a nearby country and Reagan was concerned that Cuba and the Soviet Union were establishing a military foothold there. Does it start to sound familiar now?

You may decide for yourself whether the invasion of Grenada was justified. The Cuban military presence was real, after all. And there’s certainly no question about the instability of the Grenadian government.

Then again, the eastward expansion of NATO and the more recent EU/American attempts to increase Western influence in Ukraine have been quite real too. And there’s certainly no question about the instability of the Ukrainian government. So does that mean Vladimir Putin was justified in sending troops into Crimea? Once again, you may decide for yourself. But Grenada might provide a useful framework for thinking about how regional powers react to perceived threats in their backyards.