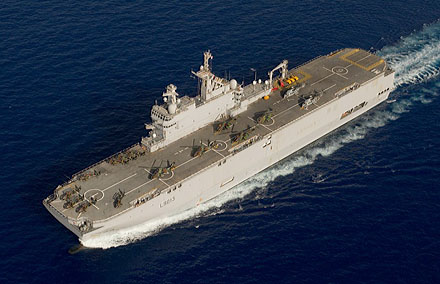 So what can Europe do to express its displeasure over Russia’s annexation of Crimea? Robert Farley writes that France is currently building a pair of amphibious helicopter carriers for Russia’s Pacific fleet:

That sale is now in considerable doubt. Because of Russia’s invasion and presumed annexation of Crimea, the European Union is considering a variety of sanctions against Moscow. The biggest stick, in military terms, may be the Mistrals, a pair of 21,000 ton warships capable of carrying over a dozen helicopters, in addition to a well-deck for amphibious landing craft. That the Russians chose to name the second ship Sevastopol, after a city not in Russian possession until after the recent invasion, only makes the sale so much uglier from the European point of view.

….The purchase of the Mistrals (which was to include a pair of ships built under license in Russian yards) was controversial in Russia, given that it represented a transfer of scarce defense monies to a major foreign contractor. Some Russian analysts also expressed concern about what technologies the ships would include. However, given the inability of Russian yards to turn out large, quality ships since the end of the Cold War, the Mistrals represented the best chance of adding aviation and amphibious capabilities to Russia’s decaying fleets.

That final sentence is crucial. Russia didn’t agree to buy French ships because it wanted to. It agreed to buy French ships because it had to. The Russian military may still be able to take on Crimea or South Ossetia—neither one larger than Vermont—but it no longer has the capability to do much more. For all his nationalistic bluster, Vladimir Putin has done nothing to address this shortfall, contenting himself instead with creating a comfortable, oligarchic state that can, for the time being, live off its mineral wealth. Putin may or may not decide to invade Eastern Ukraine, but if he does, he’ll only do it if he believes that Ukraine will fall with barely a shot fired. He really can’t afford to fight a serious war.

In any case, the French foreign minister said today for the first time that the Mistral deal might well be canceled—but only if other countries pitch in. “We will ask others, and I’m thinking namely the British, to do the same with the assets of the Russian oligarchs in London,” he said in a TV interview. “Sanctions have to be shouldered by everyone.”