Megan McArdle asks, “Is Obamacare now beyond repeal?” Good question! McArdle goes through the various estimates of enrollment figures, concluding that something in the neighborhood of 5.5-6.5 million people are likely to sign up this year, depending on how much enrollment accelerates in the last few days of March and how many people drop out because they fail to pay their premiums. That sounds reasonable to me. Then this:

Does that mean that Obamacare will basically be beyond repeal, as its supporters hope? It certainly makes things harder. But we still don’t know how many of these people are newly insured, or how many of the previously insured like these policies better than their old policies — nor how much pressure it is going to end up putting on the budget. Those are things we won’t know for quite a while. But if it were impossible to ever cut off an expensive entitlement that goes to the middle class, TennCare would never have been cut.

But there’s something missing here. It’s something that nearly everyone has neglected in the frenzy to figure out what’s happening right now. Here it is: the world doesn’t stop in 2014. Enrollment of around 6 million makes Obamacare hard to repeal, but for now that’s not really what’s holding it in place. What’s holding it in place is the fact that Democrats control the Senate and Barack Obama occupies the White House. And even if the Senate switches parties next year, I think we can all agree that Obamacare is going nowhere as long as 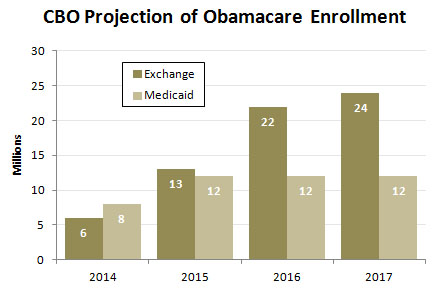 Obama stays president. So 2017 is the earliest it could even plausibly be repealed.

But what do things look like in 2017? The chart on the right shows the latest CBO estimates. By 2017, a total of 36 million Americans will be covered by Obamacare. Of that, 24 million will have private coverage via the exchanges and 12 million will be covered by Medicaid. Those are very big numbers. Even if Republicans improbably manage to get complete control of the government in the 2016 election and eliminate the filibuster so Democrats can’t object, they’ll still have to contend with this.

Does this make Obamacare invulnerable? Of course not. Nothing makes it invulnerable. It’s always possible, though it seems vanishingly unlikely at this point, that it will fail so badly that even Democrats sour on it in a couple of years. It’s also possible that Republican hostility will remain so furious that they just flatly don’t care about 36 million constituents. And maybe they won’t care that the health care industry is fully invested in Obamacare and will fight efforts to get rid of it.

Anything is possible. But when you talk about the chances of repealing Obamacare, you should be talking about 2017. And if you’re talking about 2017, then the number that matters isn’t 6 million, it’s 36 million. That’s a mighty big nut to crack.