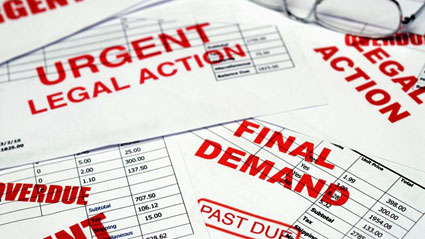 In yet another story that ought to be an April Fools joke but isn’t, David Dayen reports on the sordid, shadowy world of debt collectors:

Last month, Amrit Singh, an adjunct professor at Hostos Community College in the South Bronx, received a letter from the New York City Marshal, advising him that he owed $10,000, due within 20 days….Singh called the Marshal’s office, and they told him Atlantic Credit, a debt collection agency, secured a judgment against him for the $10,000….He was also told that the original debt came from HSBC Bank, for accumulated fees and interest on an account dating back to 2008. “This was more suspicious, because I had never opened an account with HSBC, neither me nor my wife,” Singh said. His credit report showed no record of him owing money to the bank, or any other credit incident matching this level of debt.

A colleague of Singh’s, hearing the story, had a theory. “He said, they probably told an intern, ‘Amrit Singh owes this money, go look up a name.’ And the intern found me.”

….“Creditors provide debt buyers with almost no data, no original contract, no backup information,” said Ira Rheingold, executive director of the National Association of Consumer Attorneys….Debt collectors pay miniscule amounts—between four and seven cents on the dollar—for the vague information they get, so they have little incentive to ask for a more legitimate product that might cost more. They simply turn around and try to collect, making guesses based on the names and account numbers given. “We see everything. They go after people with similar names, the same name, fathers and sons getting called on each other’s debts,” said Carolyn Coffey, a Supervising Attorney at MFY Legal Services, a non-profit law firm in New York City. “They figure they bought this for so cheap, as long as they get a few positive hits, they’re going to make money.”

Is there any hope for reform? Click the link to find out.