I’m having a hard time finishing Thomas Piketty’s Capital in the 21st Century. Is this because it’s a long, dense tome? Not really, though that doesn’t help. Is it because he has nothing interesting to say? Not at all. Capital presents a very provocative thesis. Nevertheless, I started it once, put it down, finally picked it up again, and still haven’t finished it.

So what’s the problem? It’s pretty simple: Piketty’s provocative thesis is extremely elementary and he makes it right in the introduction. Here it is in a nutshell:

Over the long run, ordinary labor income grows at about the same rate as the broader economy. That’s about 2-3 percent per year these days. Capital, however, tends to produce real returns of 4-5 percent. This means that over the course of, say, 50 years, labor income will increase about 3x while capital stocks will increase about 9x. That in turn means that income from capital will also increase 9x. And since rich people have by far the bulk of all capital income, income inequality inevitably grows forever unless something stops it.

The shorthand for this is r > g. That is, r (the return on capital) is historically greater than g (economic growth), which means that rich people with capital will always see their incomes grow faster than ordinary wage slaves. The rest of the book is a lengthy succession of charts and tables demonstrating that, 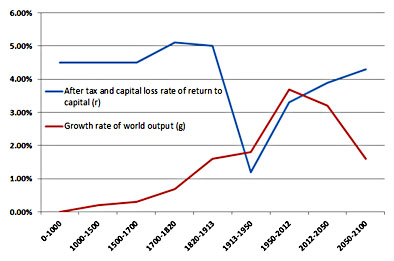 historically, r really is greater than g. Since I was pretty easily persuaded of this, I had a hard time slogging through all the details.

In any case, the historical data isn’t really why anyone other than specialists cares about this book. After all, the world has been ticking along for centuries, and somehow the rich have not, in fact, accumulated 99.9 percent of the world’s income despite more than a thousand years of r being greater than g. Why? The simple answer, I gather, is war. This is the great leveler. The rich get richer for a while, but then they lose it all during periods of war, and the cycle starts all over. That’s what happened in the 20th century: The rich were obscenely wealthy early on, and then came World War I, the Great Depression, and World War II. That wiped out lots of wealth, and the postwar rebuilding era was one of those rare eras when g was actually greater than r. (See chart on right.) So labor did relatively well for a few decades. This ended in the 80s, when the old historical pattern reasserted itself.

This brings us to the question we really care about: Now that we’ve reverted to a more ordinary r > g world, will this continue? I started skipping through the book to find Piketty’s answer, and I was disappointed at what I found. After some preliminary throat clearing to get clear on some details (the nature of private savings, what components should be counted in capital accounts, etc.), we get….nothing.

Basically, Piketty says that historically r has been greater than g, and there’s no reason to think this won’t be true in the future. That’s really about it. Oh, he addresses some technical issues, like the fact that a glut of capital should reduce the return on capital, but basically that’s his argument. In the past r has almost always been greater than g, and we’d be foolish to think that’s likely to change.

Don’t get me wrong: Piketty may be right. Hell, he probably is right. But while the details are of keen interest to specialists and practitioners, the gist of his argument is simply that the future will probably look like the past. That’s certainly plausible, but I’m frankly having a hard time plowing through a ton of background material in support of such a simple thesis.

I’m not sure why I’m fessing up to all this. I’m really doing nothing except admitting that I’m not sure what everyone else sees that I don’t. As a data-gathering exercise, this book is unquestionably a tour de force, and I’m truly not trying to slight Piketty’s seminal achievement here. But as a layman’s guide to the future (and it’s explicitly written for a lay audience), Capital has little to say except that current trends will probably continue. It might be unreasonable to expect more, since obviously no one can predict the future, but I guess I expected more anyway. Is r > g really a monocausal explanation for the evolution of the entire world economy? Is it possible that r might decline for structural reasons in the future? Or that g might increase thanks to automation? Or that other factors might come into play? That seems at least worth addressing in some depth.

In any case, this is Piketty’s story. Capital grows faster than labor income. Rich people have most of the capital. Therefore rich people get richer faster than ordinary wage earners and income inequality inexorably rises. If we don’t like that, we’ll have to do something about it. Piketty thinks the only answer is a global wealth tax, which he admits is a political nonstarter. Dean Baker has some other ideas here. Or maybe war will once again take care of things. Or maybe the rise of smart robots will make things even worse than Piketty ever imagined. I guess we’ll all know in another 50 years or so.