If you have a good memory, you may recall that a couple of years ago I had an unexpectedly positive reaction to Paul Ryan’s latest Medicare reform plan. His 2013 edition was still based on premium support (i.e., vouchers), but he’d made some changes. Instead of simply capping the vouchers at the rate of overall inflation, which wouldn’t come close to keeping up with medical costs, Ryan proposed that insurers would bid for Medicare business. Vouchers would be set at the cost of the second-lowest bid, and seniors could use their vouchers to buy into traditional Medicare if they preferred.

Not bad. In fact, it was basically Obamacare with a public option. But there were still problems. Ryan kept his inflation-based cap, which suggested he didn’t really believe in the power of competition after all, and seniors would still end up paying more under his plan than they do now.

But over at TPM, Sahil Kapur points out something I missed: Ryan’s 2014 Medicare plan is different still. The voucher is now based on the average bid, not the second-lowest bid, and the inflation cap is gone. 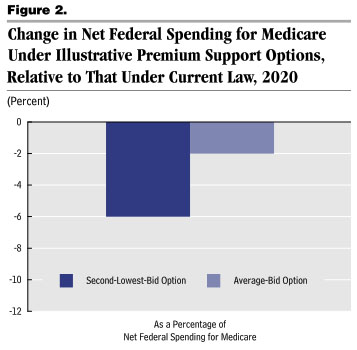 The market will either produce savings or it won’t.

That’s good news. But it also goes to show the difficulty of truly reforming Medicare, especially if you don’t tackle the broader problems of health care costs at the same time. The CBO has analyzed the effect of Ryan’s 2014 changes, and they conclude that by 2020 the Ryan plan would save a grand total of $15 billion per year. That’s 2 percent of net Medicare spending.

Now, this is nothing to sneeze at. Savings are savings. However, like the cost containment proposals that are part of Obamacare, this represents a highly speculative estimate. We might get the 2 percent, we might get nothing.

The bottom line is this: Without root-and-branch changes to our health care system, you’re simply not going to get big cost savings. If you make radical changes, as Ryan originally tried to do, it comes out of the pockets of seniors. If you keep seniors whole, you’re going to get small savings at best. Ryan’s 2014 plan might be a good one, but is it worth the experiment for such a small and questionable payback? Hard to say.