Via Andrew Sullivan, Jay Caspian Kang relays the results of a new study on gambling:

Juemin Xu and Nigel Harvey, the study’s authors, took a sampling of 569,915 bets taken on an online sports-gambling site and tracked how previous wins and losses affected the probability of wins in the future. Over all, the winning percentage of the bets was somewhere around forty eight per cent. Xu and Harvey isolated the winners and tracked how they fared in their subsequent bets. In bet two, winners won at a rate of forty-nine per cent. From there, the numbers go haywire. A player 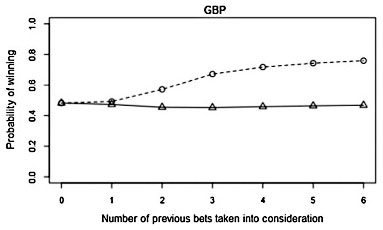 who had won two bets in a row won his third bet at a rate of fifty-seven per cent. His fourth bet won sixty-seven percent of the time, his fifth bet seventy-two.

….Winning and losing streaks had no correlation with the skill or risk aversion of the gambler…. What the research did find was that gamblers on streaks—good or bad—acted under the influence of the gambler’s fallacy. Winning bettors began placing more prudent bets because they assumed their luck would soon run out. Losers began placing bets with longer odds because they wanted to win big when their luck finally, inevitably changed.

Can I point out that this makes no sense? If it’s true, it implies that there are “prudent” bets that regularly pay off 72 percent of the time—bets that streaky players identify instinctively. If you could carefully restrict yourself to just those bets, you’d clean up.

Now, sure, maybe those are short-odds bets that don’t pay much. But it turns out they aren’t all that short:

Among all GBP gamblers [i.e., those gambling in British pounds], the mean level of selected odds was 7.72. After a winning bet, lower odds were chosen for the next bet. The mean odds dropped to 6.19. Following two consecutive winning bets, the mean odds decreased to 3.60. People who had won on more consecutive occasions selected less risky odds. This trend continued.

Fine. But odds of 3.60 still don’t pay off more than half the time. The fact that people on a streak place bets with odds like this does not, not, not explain why they’re winning so often. After all, if prudent bets were all it took to win regularly, pros could identify them routinely and place huge sums on these sure winners. A modest payoff would still produce big paydays. This is not the way casinos work.