Army lieutenant general Daniel Bolger, who recently retired from the service after multiple tours in Iraq and Afghanistan, has written a book called Why We Lost. Long story short, he says we never had a chance:

“By next Memorial Day, who’s going to say that we won these two wars?” Bolger said in an interview Thursday. “We committed ourselves to counterinsurgency without having a real discussion between the military and civilian leadership, and the American population —‘Hey, are you good with this? Do 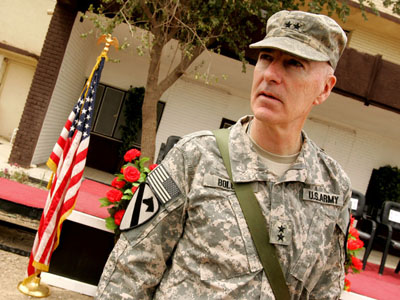 you want to stay here for 30 or 40 years like the Korean peninsula, or are you going to run out of energy?’ It’s obvious: we ran out of energy.”

….“We’ve basically installed authoritarian dictators.” The U.S. wanted to keep about 10,000 troops in Iraq post-2011…and a similar sized force is being debated for Afghanistan once the U.S. combat role formally ends at the end of 2014. “You could have gone to that plan in 2002 in Afghanistan, and 2003 or ’04 in Iraq, and you wouldn’t have had an outcome much worse than what we’ve had,” Bolger says.

“They should have been limited incursions and [then] pull out — basically like Desert Storm,” he adds, referring to the 1991 Gulf War that forced Saddam Hussein’s forces out of neighboring Kuwait after an air campaign and 100-hour ground war. The U.S. wasn’t up to perpetual war, even post-9/11. “This enemy wasn’t amenable to the type of war we’re good at fighting, which is a Desert Storm or a Kosovo.”

Hmmm. It seems to me that we had endless discussions about the difficulties of counterinsurgency and the fact that the United States is really bad at it. Books were published, reports were written, and David Petraeus became famous as the guy who finally got it on the counterinsurgency front. For several years it was the hottest topic in military circles, bar none.

Still, late to the party or not, Bolger’s conclusions are welcome. America’s modern track record in counterinsurgencies is terrible. The track record of every developed country in counterinsurgencies is terrible. I don’t know if anyone will remember this the next time we’re thinking about fighting another one, but the more experienced voices we have reminding us of this, the better.