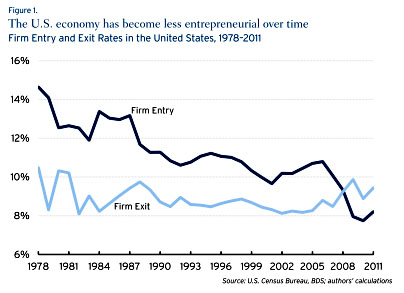 Jim Pethokoukis highlights an interesting chart today from a Brookings report. The authors are concerned about a declining rate of entrepreneurship in the United States:

Business dynamism is inherently disruptive; but it is also critical to long-run economic growth. Research has established that this process of “creative destruction” is essential to productivity gains by which more productive firms drive out less productive ones, new entrants disrupt incumbents, and workers are better matched with firms. In other words, a dynamic economy constantly forces labor and capital to be put to better uses. But recent evidence points to a U.S. economy that has steadily become less dynamic over time. Two measures used to gauge business dynamism are firm entry and job reallocation. As Figure 1 shows, the firm entry rate—or firms less than one year old as a share of all firms—fell by nearly half in the thirty-plus years between 1978 and 2011.

So fewer people are starting up new businesses, and this trend has been evident for several decades. Pethokoukis speculates that the problem might be too little uncertainty in the economy: “Maybe the U.S. private sector has become too conservative and cautious….The U.S. still generates lots of innovation overall, but maybe too much is of the job-killing sort rather than job-creating kind that marks a dynamic economy.”

Maybe. But I’d really like to see a breakdown of what kinds of business creation have declined. My first guess here is that the decline hasn’t been among the sort of Silicon Valley firms that drive innovation, but among more prosaic small firms: restaurants, dry cleaners, hardware stores, and so forth. The last few decades have seen an explosion among national chains and big box retailers, and it only makes sense that this has driven down the number of new entrants in these sectors. When there’s a McDonald’s and a Burger King on every corner, there’s just less room for people to open up their own lunch spots. But if there’s been a decline in the number of new small retailers, that may or may not say anything about the dynamism of the American economy. It just tells us what we already know: national chains, with their marketing efficiencies and highly efficient logistics, have taken over the retail sector. Amazon and other internet retailers are only hastening this trend.

But is this what’s really driving the downward trend in new business creation? The Brookings report doesn’t give us any clues. But it sure seems like this is the absolute minimum we need to know in order to draw any serious conclusions about what’s really going on here.