A new Kaiser survey shows that 57 percent of those who bought health insurance on Obamacare exchanges were previously uninsured. That’s about 4.5 million people who gained private insurance via the exchanges, and the vast 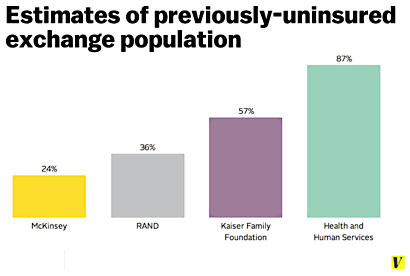 majority of them say they would have remained uninsured if not for Obamacare. If this number is correct, it suggests that the number of newly insured by the end of the year will be a little higher than I’ve projected before—perhaps around 11-13 million.

But is it correct? Sarah Kliff provides the chart on the right showing the wildly different estimates from different sources, and explains that much of the divergence is due to different organizations asking different questions:

McKinsey asked people to identify the insurance they had “most of the year” in 2013….The RAND estimate relies on the research firm’s ongoing American Life Panel….It found that, when it reached out to them mostly in early March, that 36 percent of those who had exchange coverage were, in earlier surveys, uninsured.

….Health and Human Services has estimated 87 percent of certain Obamacare enrollees lacked coverage when they signed up. This figure comes from a question on Healthcare.gov….The Kaiser Family Foundation report….asked survey respondents this question: “Before you began coverage under your current health insurance plan, were you covered by a different plan you purchased yourself, were you covered by an employer, by COBRA, did you have Medicaid or other public coverage, or were you uninsured?”

To a certain extent, there is no right answer. The basic problem is that the pool of uninsured has a lot of churn: people are covered for a while, then lose their jobs, then get another job, etc. So if you had insurance last August, but lost your job and signed up for Obamacare in November, do you count as previously uninsured? According to McKinsey, no. According to Kaiser, yes.

My own guess is that the Kaiser methodology is probably the closest of the four to what we’d normally think of as “uninsured,” and its sample size is big enough to be reliable. In any case, when you combine these surveys with the Gallup results, the most likely number seems to be somewhere around 50 percent. Given the inherent subjectivity of the topic, that’s probably about as good an estimate as we can get. There’s just no reliable way to get precision any higher.