The Supreme Court could have obliterated public sector unions today by ruling that workers can’t be required to pay representation fees if they disagree with the union’s political stands. It’s been longstanding practice that such workers don’t have to pay full union dues—which include money used for political 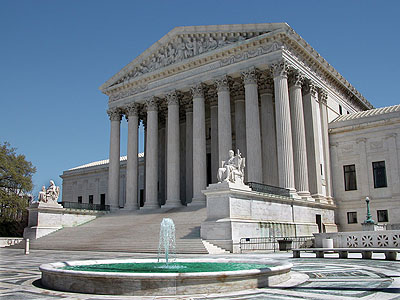 activity—but do have to pay fees that are used to support collective bargaining activities that benefit everyone.

But the court stepped back from the brink today, ruling in favor of workers who objected to the fees, but then saying their ruling was limited solely to home health care workers:

The ruling was limited to this particular segment of workers — not private sector unions — and it stopped short of overturning decades of practice that has generally allowed public sector unions to pass through their representation costs to nonmembers.

Writing for the court, Justice Samuel Alito said home care workers are different from other types of government employees because they work primarily for their disabled or elderly customers and do not have most of the rights and benefits of state employees.

….The workers had urged the justices to overturn a 1977 Supreme Court decision which held that public employees who choose not to join a union can still be required to pay representation fees, as long as those fees don’t go toward political purposes. They say the union is not merely seeking higher wages, but making a political push for expansion of Medicaid payments.

Alito said the court was not overturning that case, Abood v. Detroit Board of Education. That case, he said, is confined “to full-fledged state employees.”

So public sector unions live to fight another day. At this point, the question is whether a majority on the court is truly unwilling to overturn Abood, or whether they want to do it slowly and today’s case is just an opening volley.

In other news, the good guys lost in the Hobby Lobby case:

The U.S. Supreme Court dealt a setback to President Obama’s healthcare law Monday and ruled that Christian business owners with religious objections to certain forms of birth control may refuse to provide their employees with insurance coverage for contraceptives.

In a major 5-4 ruling on religious freedom, the justices decided the religious rights of these company owners trump the rights of female employees to receive the full contraceptive coverage promised by the law.

Alito wrote the Hobby Lobby opinion too, and he was careful to say that this case doesn’t apply to much of anything else that a religious employer might object to. Only things related to abortion, apparently. Because….um, that’s plainly more important than any other religious objection on the planet. Or something.

In the end, I suppose that’s good news. A narrow ruling is better than a broad one. Today’s holding applies only to closely-held corporations (those in which a small number of people have majority control of the company), and Kennedy’s concurrence apparently says the government can pay directly for contraception coverage if it want to. It could have been worse.