Here’s something that counts as good news: GDP increased in the second quarter at an annual rate of 4.0 percent. At the same time, the first quarter numbers were revised to a slightly less horrible -2.1 percent growth rate. This means, 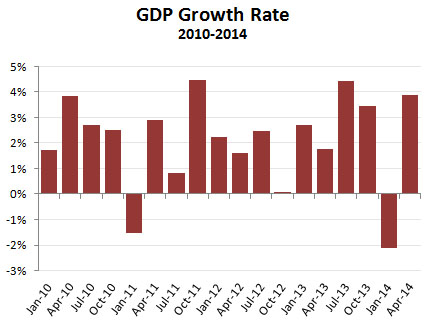 roughly speaking, that the economy has grown about 1.9 percent over the first half of the year.

Now, this is obviously nothing to write home about. A growth rate of 1 percent per quarter is pretty anemic. Still, it’s better than expectations after the terrible Q1 numbers, and the rebound in Q2 suggests there really was some make-up growth. A fair amount of this growth came from inventory build-up, which is normally a reason for caution, but after two previous quarters of inventory decline it’s probably not the warning sign it might otherwise be.

All in all, this is decent news. It’s still not possible to say that the economy is roaring along or anything, but the Q1 number now looks like it really was an anomaly. Slowly and sluggishly, the economy is continuing to recover for the ~95 percent of us who haven’t been unemployed for months or who haven’t given up and exited the labor force entirely. For those people, economic growth is still slow enough to leave them behind. One good quarter is nice, but we still have a lot of work to do.