So what are Republicans in the House of Representatives up to these days? According to Danny Vinik, they just passed a bill that would reduce taxes on the rich and raise them on the poor.

I know, I know: you’re shocked. But in a way, I think this whole episode is even worse than Vinik makes it sound.

Here’s the background: The child tax credit reduces your income tax by $1,000 for each child you have. It phases out for upper middle-income folks, but—and this is the key point—it phases out differently for singles and couples. The way the numbers sort out, it treats singles better than couples. This is the dreaded “marriage penalty,” which is bad because we want to encourage people to get married, not discourage them.

So what did House Republicans do? Naturally, they raised the phase-out threshold for married couples so that well-off couples would get a higher benefit. They didn’t have to do this, of course. They could have lowered the benefit for singles instead. Or they could have jiggled the numbers so that everyone got equal benefits but the overall result was revenue neutral.

But they didn’t. They chose the path that would increase the benefit—and thus lower taxes—for married couples making high incomes. The bill also indexes the credit to inflation, which helps only those with incomes high enough to claim the full credit. And it does nothing to make permanent a reduction in the earnings threshold that benefits poor working families. Here’s the net result:

If the House legislation became law, the Center for Budget and Policy Priorities estimated that a couple making $160,000 a year would receive a new tax cut of $2,200. On the other hand, the expiring provisions of 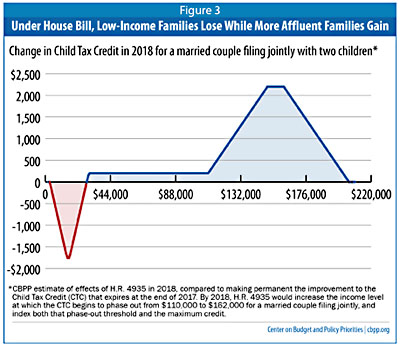 So inflation indexing, which is verboten when the subject is the minimum wage, is A-OK when it comes to high-income taxpayers. And eliminating the marriage penalty is also a good idea—but again, only for high-income couples. Which is crazy. I don’t really have a firm opinion on whether the government should be in the business of encouraging marriage, but if it is, surely it should focus its attention on the people who need encouragement in the first place. And that is very decidedly not the upper middle class, which continues to get married at the same rate as ever.

So we have a deficit-busting tax cut. It’s a cut only for the upper middle class. It’s indexed for inflation, even though we’re not allowed to index things like the minimum wage. And the poor are still scheduled for a tax increase in 2017 because this bill does nothing to stop it. It’s a real quad-fecta. I wonder what Paul Ryan thinks of all this?