Republicans have repeatedly failed to pass anything of substance regarding immigration, and their latest fiasco over the border crisis makes their 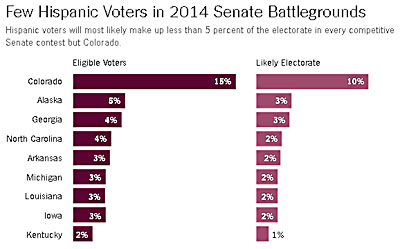 haplessness more apparent than ever. But will it matter this November? Nate Cohn says no:

….Hispanic voters will have even less influence over the composition of the House, which is all but assured to remain in Republican hands….The reason is simple. In districts held by House Republicans, Hispanics represent only 6.7 percent of eligible voters. The Hispanic share of eligible voters is nearly as low in the House battlegrounds, 7.4 percent.

Add to this the fact that Hispanics already vote for Democrats in large numbers, and Republicans just don’t have very much to lose. Even if they lost another 10 percent of the Hispanic vote (an improbably huge number), that would represent considerably less than 1 percent of the total vote. That just won’t make a difference except in a few of the very tightest races.

The main exception here is Colorado, which has a substantial Hispanic population. But Colorado has never been a likely Republican pickup anyway, so it’s unlikely to affect overall Republican chances of taking control of the Senate this year.

Now, as Cohn says, in a tight race anything can make a difference. And the Senate race is tight enough that control could easily come down to one close race in one state. If Georgia ends up being decided by a 51-49 vote, it’s just possible that Hispanic turnout could make the difference.

Probably not, though, and this is a good illustration of the current dynamics in American elections: national demographic trends are making it harder and harder for Republicans to win the presidency, but those same trends don’t affect congressional votes that much as long as Republicans can hold onto their base. So the GOP can maintain its ability to obstruct, but is losing its ability to lead.

In other words, you should probably get used to gridlock. It’s not going away anytime soon.