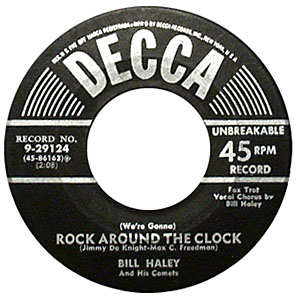 Kelsey McKinney asks today why popular songs are almost all 3-5 minutes long. The historical basis for this is obvious: 45 rpm singles hold about three minutes of music, so modern pop music was born in an era when technology limited songs to about three minutes or so. But what about more recently?

It makes sense to assume that since the basis of the three-minute song was the 78 and then 45 rpm single, then songs would become longer as technology evolved….But the length of songs had its biggest jump, according to this data, between the ’60s and ’80s, and very little has changed from the ’90s to 2008, a time period when the technology of music changed drastically.

“What drives what is heard on the radio is an artist’s desire to have their music hit the mainstream, and a record label’s desire to profit from that,” Steve Jones, vice president at the Canadian radio firm Newcap, told NPR….Jones is right. The length of a song on an album doesn’t matter for anyone except for the artist and fans, but a song that hopes to make money and be played on the radio simply has to be a certain length. Either that, or radio stations will edit the song down to the standard, making it three to four minutes, just like the 45.

But this begs the question. Why do radio stations insist on three minutes? They don’t run ads after literally every song, so it’s not because advertisers demand it. The obvious answer is that this is, in fact, what most fans want.

The core explanation, I think, is that most popular music simply doesn’t have the complexity to sustain itself beyond a few minutes. Both the lyrics and the melodies tend to be fairly simple, and after a few minutes they’ve exhausted their potential. Compare this to classical music and you see it more clearly. Most classical music is considerably more complex than your average pop song, but even so a single movement of a sonata or a symphony usually clocks in at no more than ten minutes or so. Opera arias—which developed in a pre-technological age and with much more patient audiences—are closer in length to modern pop songs, typically lasting 3-7 minutes.

Obviously there are exceptions to this. There are plenty of examples of longish pop songs, just as there are examples of classical pieces longer than ten minutes. But generally speaking, you need a fair amount of complexity to sustain these lengths, and that’s not what most people want. They want simple and hummable, and that means not too long.