A recent poll from Reason magazine investigates the burning question of whether kids on sports teams should all get participation trophies, or whether it should only be the winners. Overall, 57 percent think only the winners should get trophies, but 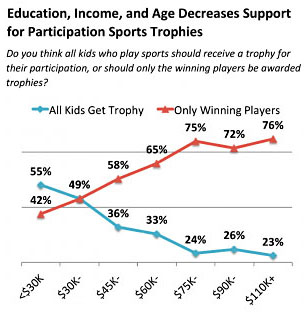 the detailed breakdown is kind of interesting. It turns out that society’s winners generally think that only winners should get trophies. Society’s also-rans tend to think everyone should be recognized.

I wonder how much of this has to do with the word trophy? For many decades, after all, the US military has awarded ribbons to anyone who participates in surface combat. This is a very egalitarian award. You don’t need to have done anything special. You don’t need to have won. You just need to have participated. Nobody complains about this, but then again, it’s just a ribbon that shows you’ve been part of an actual combat action. It’s not a trophy or even a medal.

So would people react the same way to giving every kid a participation ribbon? I’ll bet not. No one would object. But many of them do object to trophies. It’s funny how a cheap bit of gold-colored plastic stirs the passions so much, isn’t it?

UPDATE: I have no personal experience with either surface combat or kids’ sports. Those who do should feel free to school me in comments if I’m wrong about any of this.

UPDATE 2: Several commenters have pointed out that, in fact, participation trophies are mostly limited to very young age groups, like five-year-olds. This makes a kind of sense, since at that age winning and losing is mostly just a matter of chance anyway. Among older kids, though, the whole “participation trophy” thing is just a myth.