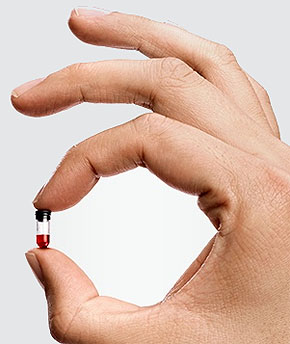 Elizabeth Holmes is the third-youngest billionaire on the Forbes 400 list (behind Facebook tycoons Mark Zuckerberg and Dustin Moskovitz). And hooray for her! Her business model doesn’t depend on getting drunk teenagers to eventually regret that they ever heard of the internet. It depends instead on a genuinely useful invention: a new type of blood test that requires only a tiny pinprick and a single drop of blood. Slate’s Kevin Loria tells us about it:

Traditional blood testing is shockingly difficult and expensive for a tool that’s used so frequently. It also hasn’t changed since the 1960s. It’s done in hospitals and doctors’ offices. Vials of blood have to be sent out and tested, which can take weeks using traditional methods and is prone to human error. And, of course, sticking a needle in someone’s arm scares some people enough that they avoid getting blood drawn, even when it could reveal lifesaving information.

Holmes recognized that process was ripe for disruption….The new tests can be done without going to the doctor, which saves both money and time. Most results are available in about four hours….Blood samples have traditionally been used for one test, but if a follow-up was needed, another sample had to be drawn and sent out—making it less likely that someone would get care. The Theranos approach means the same drop can be used for dozens of different tests.

It’s cheap, too. One common criticism of the healthcare system is that the pricing structure is a confusing labyrinth that makes it impossible to know how much anything costs. Theranos lists its prices online, and they’re impressive.

It so happens that I’ve been getting more than the usual amount of blood drawn lately, and it also so happens that I’m one of those people who really hates this. My angst is for completely irrational reasons. I know it doesn’t hurt; it doesn’t take long; and it poses no danger. As it happens, my own particular phobia is so bizarre and unaccountable that I’m reluctant to even fess up to it. But it’s this: The scarless incision wigs me out. For the rest of the day after a blood test, I’m convinced that any second it’s going to pop open like an oil gusher. I used to keep that little cotton ball taped on for a full 24 hours, until the next day’s shower finally forced me to take it off. I have recently, through sheer force of will, started taking it off after only a few hours.

This makes no sense. But then, phobias rarely do. And mine isn’t even that bad. When I need to get blood drawn, I do it. Still, I often put it off, and I refuse to get it done more than once every two weeks or so. I also refuse to ever have it done in my right arm.

By now, you’re either laughing at me or else wondering if I’ve lost my marbles. But I agree with Holmes: traditional blood testing is barbaric and medieval and it’s long past time to bring it into the 21st century. So hooray for Elizabeth Holmes. My only question now is this: When is she going to sign a contract with Kaiser so that I’ll be able to benefit from her marvelous invention?