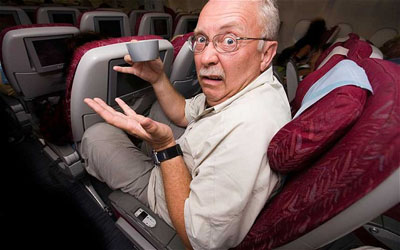 Slate has a great example today of the endowment effect, aka status quo bias:

In an online survey, we asked people to imagine that they were about to take a six-hour flight from New York to Los Angeles. We told them that the airline had created a new policy that would allow people to pay those seated in front of them to not recline their seats. We asked one group of subjects to tell us the least amount of money that they would be willing to accept to not recline during the flight. And we asked another group of subjects to tell us the most amount of money that they would pay to prevent the person in front of them from not reclining.

….Recliners wanted on average $41 to refrain from reclining, while reclinees were willing to pay only $18 on average….When we flipped the default—that is, when we made the rule that people did not have an automatic right to recline, but would have to negotiate to get it—then people’s values suddenly reversed. Now, recliners were only willing to pay about $12 to recline while reclinees were unwilling to sell their knee room for less than $39.

So what would happen if this experiment were done in real life on a large scale—and without any messy face-to-face negotiation? Suppose an online booking service offered non-reclining seats for a $20 discount and the seats behind them for a $20 extra charge? Would the market clear? No? Then try $15. Or $25. I’ll bet it wouldn’t take too long to find the market-clearing price, and I’ll bet it would be somewhere around $25 on most flights. (Though possibly much more on red-eyes.)

The authors of the Slate piece note that in the online experiment, the status quo would have changed only about a quarter of the time. But that’s to be expected. I’d be likely to pay for the legroom because I’m fairly tall and I sometimes want to use a laptop on my tray table. But for anyone of average height or less, it’s probably not that big a deal. Likewise, some people care about reclining and others don’t. I mostly don’t, for example. Put it all together, and I’d guess that if you offered this deal on a long-term basis, less than 20 percent of all seats would be affected.

Now, would any airline find it worthwhile to do this? Probably not. There’s no money in it for them, and enforcement would be a huge pain in the ass. But it would certainly be an interesting real-world experiment if anyone were willing to give it a go.