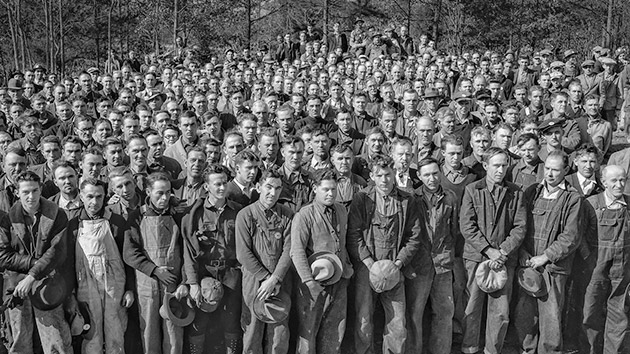 Noam Scheiber takes on one of the lessons du jour that always crop up after a party gets shellacked at the polls: how do we appeal to demographic group X that voted so heavily against us? In this case, the party is the Democrats, and the demographic group is the infamous white working class, which voted Republican by a 30-point margin last week:

At first blush, the white working class would appear to pose a real dilemma. The set of issues on which the Democratic Party is most coherent these days is social progressivism….But while these issues unite college-educated voters and working-class minority voters, they’ve historically alienated the white working class.

….How to square this circle? Well, it turns out we don’t really have to, since the analysis is outdated. The white working class is increasingly open to social liberalism, or at least not put off by it. As Ruy Teixeira and John Halpin observed this summer, 54 percent of the white working class born after 1980 think gays and lesbians should have the right to marry, according to data assembled from the 2012 election.

….Long story short, there’s a coalition available to Democrats that knits together working class minorities and college-educated voters and slices heavily into the GOP’s margins among the white working class….The basis of the coalition isn’t a retreat from social progressivism, but making economic populism the party’s centerpiece….The politics of this approach work not just because populism is a “message” that a majority of voters want to hear. But because, unlike the status quo, it can actually improve their economic prospects, as Harold Meyerson recently pointed out.

I’d like to offer a different interpretation. I don’t have a bunch of poll data readily at hand to back this up, so it’s possible I’m way off base. But I don’t think so, and at the very least I welcome pushback since it might clarify some things that need clarifying.

Here it is: I agree that social liberalism isn’t quite the deal killer it used to be. Scheiber and Teixeira are right about that. It’s still an issue—especially gun control, which remains more potent than a lot of liberals like to acknowledge—but it’s fading somewhat in areas like abortion and gay marriage. There are still plenty of Fox-watching members of the WWC who are as socially conservative as ever, but I think it’s safe to say that at the margins social issues are becoming a little less divisive among the WWC than they have been over the past few decades.

Also read: What If Everything You Knew About Poverty Was Wrong?”

But if that’s the case, why does the WWC continue to loathe Democrats so badly? I think the answer is as old as the discussion itself: They hate welfare. There was a hope among some Democrats that Bill Clinton’s 1996 welfare reform would remove this millstone from around Democrats’ necks, and for a few years during the dotcom boom it probably did. The combination of tougher work rules and a booming economy made it a less contentious topic.

But when the economy stagnates and life gets harder, people get meaner. That’s just human nature. And the economy has been stagnating for the working class for well over a decade—and then practically collapsing ever since 2008.

So who does the WWC take out its anger on? Largely, the answer is the poor. In particular, the undeserving poor. Liberals may hate this distinction, but it doesn’t matter if we hate it. Lots of ordinary people make this distinction as a matter of simple common sense, and the WWC makes it more than any. That’s because they’re closer to it. For them, the poor aren’t merely a set of statistics or a cause to be championed. They’re the folks next door who don’t do a lick of work but somehow keep getting government checks paid for by their tax dollars. For a lot of members of the WWC, this is personal in a way it just isn’t for the kind of people who read this blog.

This is a big problem because these are all things that benefit the poor but barely touch the working class. Does it matter that the working class barely pays for most of these programs in the first place, since their federal income taxes tend to be pretty low? Nope. They’re still paying taxes, and it seems like they never get anything for it. It’s always someone else.

It’s pointless to argue that this perception is wrong. Maybe it is, maybe it’s not. But it’s there. And although it’s bound up with plenty of other grievances—many of them frankly racial, but also cultural, religious, and geographic1—at its core you have a group of people who are struggling and need help, but instead feel like they simply get taxed and taxed for the benefit of someone else. Always someone else. If this were you, you wouldn’t vote for Democrats either.

I hate to end this with the usual cliche that I don’t know what to do about it, but I don’t. Helping the poor is one of the great causes of liberalism, and we forfeit our souls if we give up on it. And yet, as a whole bunch of people have acknowledged lately, the Democratic Party simply doesn’t do much for either the working or middle classes these days. Republicans, by contrast, offer both the concrete—tax cuts—and the emotional—an inchoate but still intense rage against a government that seems not to care about them.

So sure: full-throated economic populism? That might work, though everyone seems to have a different idea of what it means. But here’s one thing it better mean: policies that are aimed at the working and middle classes and that actually appeal to them. That is, policies that are simple, concrete, and offer benefits which are clear and compelling.

This is going to require policy wonks to swallow hard. Remember Cash 4 Clunkers? Economically, that was probably a dumb program that accomplished little. But it didn’t do any harm, and people sure loved it. Multiply that by a hundred and you’re on the right track.

1The Democrats’ problem with the white working class is far worse in the South than anywhere else. Nonetheless, I think we’re kidding ourselves if we crunch a bunch of numbers and somehow conclude that it’s not a problem elsewhere. It’s not as big a problem, but in an electorate that continues to be balanced on a tightrope, five or ten percentage points among a sizeable group of people is still a pretty big problem.