Long-suffering centrist Norm Ornstein wants to know why the national media has ignored the outlandish tea-partyish views of Joni Ernst, the Republican Senate candidate from Iowa. He thinks it’s because reporters have already chosen a narrative for this year’s campaign, and the 2014 version of The 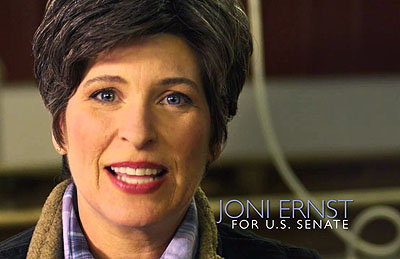 Narrative™ says that the GOP establishment finally vanquished the tea party this year after suffering through humiliating losses in 2012 by loons like Sharron Angle and Todd Akin:

The other day, The Washington Post carried a front-page profile of Joni Ernst by feature reporter Monica Hesse. The piece was particularly striking—a long, warm, almost reverential portrait of a woman candidate charming Iowans by doing it “the Iowa way”—no doubt, an accurate portrayal by a veteran journalist. Hesse did suggest, in passing, that Ernst has taken some controversial positions in the past, such as supporting “personhood,” but emphasized that she has walked them back. Not mentioned in the piece was Ernst’s flirtation with one of the craziest conspiracy theories, or her comments on dependency—or her suggestion that she would use the gun she packs if the government ever infringed on her rights.

….Of course, this does not mean that the press has a Republican bias, any more than it had an inherent Democratic bias in 2012 when Akin, Angle, and Mourdock led the coverage. What it suggests is how deeply the eagerness to pick a narrative and stick with it, and to resist stories that contradict the narrative, is embedded in the culture of campaign journalism. The alternative theory, that the Republican establishment won by surrendering its ground to its more ideologically extreme faction, picking candidates who are folksy and have great resumes but whose issue stances are much the same as their radical Tea Party rivals, goes mostly ignored.

There are several things going on here, all of them related:

And so we end up with puff pieces about Ernst’s folksiness and repeated coverage of Bruce Braley’s chicken battles. Agenda 21, personhood, privatizing Social Security, and other far-right hot buttons get buried by the simple expedient of Ernst refusing to talk to reporters about them and then being rewarded for it by reporters who admire her “control” of the press.

Obviously Ernst isn’t my cup of tea, but if the citizens of Iowa want to send a right-wing loon to the Senate—well, it’s their state. As long as they do it with their eyes open, they should go right ahead. But if they send a far-right loon to the Senate because they mistakenly think she’s actually a cheerful, pragmatic centrist, that’s not so OK. And if the press is helping her put over this charade, the press ought to take a good, long look in the mirror. They don’t need to take sides, but they do need to tell the truth.