Atrios has decided to force me to read Robert Samuelson’s column this morning. Thanks, dude. Here’s the start:

What is curious about the present understandable preoccupation with the middle class is the assumption — both explicit and implicit — that the system is “rigged” (to use Sen. Elizabeth Warren’s favorite term) against this vast constituency of Americans. In reality, just the opposite is true. The system is rigged in favor of the middle class. That’s a natural result for a democracy in which politicians compete more for votes than for dollars.

If you look at how the federal government spends and raises its money, the bias for the middle class and poor becomes plain. In fiscal 2014, about two-thirds of the $3.5 trillion federal budget went for “payments to individuals.” This covers 59 million Social Security recipients, more than 54 million Medicare beneficiaries (overlapping with Social Security), 68 million 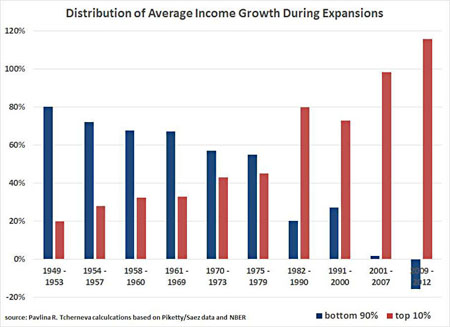 This really doesn’t make sense. When we speak of the “middle class,” we’re nearly always talking about the working-age middle class. Samuelson surely knows this. But the only programs he calls out by name are specifically directed at the elderly and the working poor. Barely a single dollar of those programs goes to middle-class workers.

What’s the point of this pretense? Beats me. I guess it allows Samuelson to ignore the stagnant middle-class wages and skyrocketing upper incomes of the past 15 years, which is what nearly everyone means when they say the system is rigged against the middle class. And it allows him to make the truly chin-scratching point that during the aughts, the result of this soaring inequality was basically a massive and fraudulent loan program from the rich to the middle class that eventually—and inevitably—broke down, producing a massive economic recession. This, in Samuelson’s view, was “an intellectual, political and social climate that legitimized lax lending policies in the name of promoting middle-class well-being.” If that’s the way we promote middle-class well-being, can I please be transferred to a different class?

I don’t agree with Samuelson much, but this column is a real head scratcher. It’s not as if any of this stuff is ancient history. For more than a decade, income gains have been going almost exclusively to the rich; the housing bust, by contrast, was a calamity mostly for the working and middle classes; and government aid programs have been aimed largely at rescuing the financial sector and (in a pinch) helping the poor. The middle-class folks thrown out of work have gotten a few grudging extensions of our meager unemployment insurance and a slight expansion of our meager disability system, but that’s about it. This is not a “crisis of faith,” as Samuelson puts it. It’s a crisis of not having very much money.