I guess I missed this in the coverage yesterday about the official end of the war in Afghanistan: 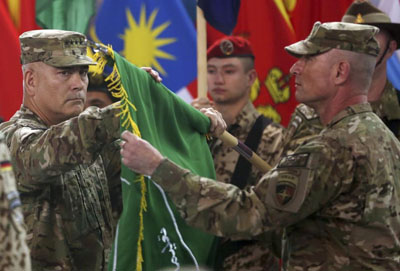 the capital city is no longer safe from the Taliban.

That’s from Max Fisher, who also provides us today with a “highly subjective and unscientific report card for US foreign policy.” As top ten lists go, this one is worth reading as a set of interesting provocations, though I think Fisher errs by focusing too heavily on military conflicts. There’s more to foreign policy than war. Beyond that, I think he often ends up grading President Obama too harshly by judging him against ideal outcomes rather than the best plausible outcomes. Giving him a C+ regarding ISIS might be fair, for example, since it’s quite possible that quicker action could have produced a better result1.  But a D- on Israel-Palestine? Certainly the situation itself deserves at least that low a grade, but is there really anything Obama could have done to make better progress there? I frankly doubt it. I’d also give him a higher grade than Fisher does on Ukraine and Syria (I think that staying out of the Syrian civil war was the right policy even though the results are obviously horrific), but a lower grade on China (A+? Nothing could have gone better?).

Overall, I continue to think that Obama’s foreign policy has been better than he gets credit for. He’s made plenty of mistakes, but that’s par for the course in international affairs. There are too many moving parts involved, and the US has too little leverage over most of them, to expect great outcomes routinely. When I look at some of the worst situations in the world (Afghanistan, Iraq, Syria, Israel-Palestine) I mostly see places that the US has little control over once you set aside straight-up military interventions. Unfortunately, that’s a big problem: the mere perception that an intervention is conceivable colors how we view these situations.

Take the long, deadly war in the Congo, for example. Nobody blames Obama for this because nobody wants us to send troops to the Congo—and everyone understands that once a military response is off the table, there’s very little we can do there. Conversely, we do blame Obama for deadly civil wars in places like Iraq and Syria. Why? Not really for any good reason. It’s simply because there’s a hawkish domestic faction in US politics that thinks we should intervene in those places. This, however, doesn’t change the facts on the ground—namely that intervention would almost certainly be disastrous. It just changes the perception of whether the US has options, and thus responsibility.

But that’s a lousy way of looking at things. US military intervention in the broad Middle East, from Lebanon to Somalia to Afghanistan to Iraq to Libya, has been uniformly calamitous. In most cases it’s not only not helped, but made things actively worse. No matter what Bill Kristol and John McCain say, the plain fact is that there’s very little the US can do militarily to influence the brutal wars roiling the Middle East and Central Asia. Once you accept that, Obama’s recognition of reality looks pretty good.

For the record, I’d give Obama an A or a B for his responses to Syria and Ukraine. Is that crazy? Perhaps. But the hard truth is that these are just flatly horrible situations that the US has limited control over. When I consider all the possible responses in these regions, and how badly they could have turned out, Obama’s light hand looks pretty good.

1Or maybe not. But it’s plausible that it might have.