What’s up with the copy desk at the Washington Post? Here’s a new story about our public schools:

Majority of U.S. public school students are in poverty

For the first time in at least 50 years, a majority of U.S. public school students come from low-income families, according to a new analysis of 2013 federal data, a statistic that has profound implications for the nation.

The Southern Education Foundation reports that 51 percent of students in pre-kindergarten through 12th grade in the 2012-2013 school year were eligible for the federal program that provides free and reduced-price lunches. The lunch program is a rough proxy for poverty, but the explosion in the number of needy children in the nation’s public classrooms is a recent phenomenon that has been gaining attention among educators, public officials and researchers.

The headline is wrong, even though Layton gets the facts pretty much right: 51 percent of kids are eligible for free or reduced-price lunches, which are available only to low-income families. That’s an important story. But participation in the federal lunch program is, as she notes, only a rough proxy for poverty: you qualify if you have a family income less than 185 percent of the poverty line. For a family of four this comes to about $44,000, which certainly qualifies as working class or lower middle class, but not poverty stricken.

But it’s more complicated than that! The 51 percent number is attention grabbing because it’s a majority, but perhaps the more important number is that 44 percent qualify for free lunches. For a family of four, that’s $31,000, just barely over the poverty line. If you got rid of the word “majority,” it would 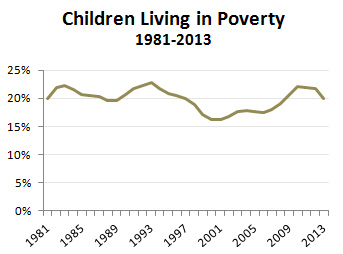 be safe to use the phrase “near poverty.” And frankly, I wouldn’t be bothered much if you just called it poverty, even if that’s not quite the official federal government definition.

But wait! It’s even more complicated than that—and this part is important. On the one hand, lots of poor kids, especially in the upper grades, don’t participate in school lunch programs even though they qualify. They just don’t want to eat in the cafeteria. So there’s always been a bit of undercounting of those eligible. On the other hand, a new program called the Community Eligibility Provision, enacted a couple of years ago, allows certain school districts to offer free meals to everyone without any proof of income. Currently, more than 2,000 school districts enrolling 6 million students are eligible, and the number is growing quickly. For example, every single child in the Milwaukee Public School system is eligible. Overall, then, although the official numbers have long undercounted some kids, CEP means they now increasingly overcount others. Put this together, and participation in the school lunch program becomes an even rougher proxy for poverty than it used to be—and any recent “explosion” in the student lunch numbers needs to be taken with a serious grain of salt. This is especially true since overall child poverty hasn’t really changed much over the past three decades, and if you use measures that include safety net programs it’s actually gone down modestly since the end of the Reagan era.

This is, perhaps, a bit too much nitpicking. Unfortunately, we’re forced to use school lunch data as a proxy for poverty among school kids because we don’t really have anything better. What’s more, child poverty increased during the Great Recession and God knows that I’m all in favor of calling attention to it. In a country of our wealth it’s a national scandal by any measure, and a massive problem that infects practically every aspect of education policy.

Still, it’s a subject that can’t easily be reduced to a single school lunch number. Both headlines and copy should do their best to treat the subject accurately.