Ezekiel Emanuel passes along the results of research about the value of getting an annual physical exam:

The unequivocal conclusion: the appointments are unlikely to be beneficial. Regardless of which screenings and tests were administered, studies of annual health exams dating from 1963 to 1999 show that the annual physicals did not reduce mortality overall or for specific causes of death from 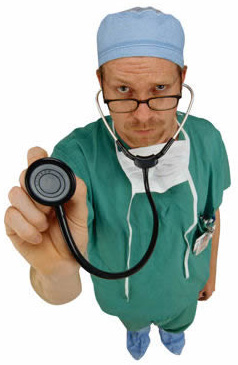 cancer or heart disease. And the checkups consume billions, although no one is sure exactly how many billions because of the challenge of measuring the additional screenings and follow-up tests.

How can this be? There have been stories and studies in the past few years questioning the value of the physical, but neither patients nor doctors seem to want to hear the message. Part of the reason is psychological; the exam provides an opportunity to talk and reaffirm the physician-patient relationship even if there is no specific complaint. There is also habit. It’s hard to change something that’s been recommended by physicians and medical organizations for more than 100 years. And then there is skepticism about the research. Almost everyone thinks they know someone whose annual exam detected a minor symptom that led to the early diagnosis and treatment of cancer, or some similar lifesaving story.

This is a funny thing. I’ve never had an annual physical. This isn’t for any specific reason. It just never occurred to me, and none of my doctors has ever recommended it. I’ve probably had half a dozen different primary care physicians over my adult life, and not one of them has ever suggested I should be getting an annual physical.

I’m not sure what this means. Is the annual physical something that doctors only do if their patients ask? Or have I just had an unusual bunch of doctors over the years? What’s your experience with this?

And as long as I’m noodling about stuff like this, here’s a thought that passed through my brain the other day. I was thinking about the fact that one of the indicators of the multiple myeloma that I was diagnosed with comes from blood tests. So why not test routinely for the markers of multiple myeloma? The answer is obvious: you’d be performing millions of blood tests every year with a vanishingly small chance of finding anything. What’s more, there are lots of different cancers. Are you going to draw a few pints of blood every year and test for all of them at a cost of tens of thousands of dollars? That makes no sense in otherwise healthy people.

But this got me thinking about that new blood testing technique I wrote about a few months ago. In a nutshell, it requires only a tiny amount of blood, and the tests themselves are super cheap. If this works as advertised—and presumably gets even cheaper with time—does it open up new possibilities for an annual physical that actually makes sense? Would it be possible to draw no more than a standard vial of blood once a year, and then perform a huge variety of tests at a cost of a few hundred dollars? The odds of finding anything would still be small, but it might nonetheless be worth it if the cost both in time and money was also small.

Of course, there are still problems with false positives and so forth, even if the cost of this regimen was small. So maybe it would be a lousy idea regardless of its feasibility. I really have no idea. But it’s an intriguing possibility.