Max Ehrenfreund points to an interesting tidbit this morning. A pair of researchers have released a working paper that attempts to figure out if watching Fox News makes you more conservative. They do this by exploiting the fact that channel numbers on cable systems are placed fairly randomly throughout the country, and people tend to watch channels with lower numbers. Thus, in areas where Fox has a low channel number, it gets watched a little bit more in a way that has nothing to do with whether the local viewers were more conservative in the first place.

So does randomly surfing over to Fox News tend to make you more right-wing? Yes indeed! “We estimate that Fox News increases the likelihood of voting Republican by 0.9 points among viewers induced into watching four additional minutes 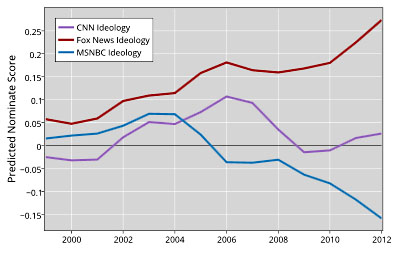 per week by differential channel positions.” And this in turn means that we owe the Iraq War to Fox News: “We estimate that removing Fox News from cable television during the 2000 election cycle would have reduced the average county’s Republican vote share by 1.6 percentage points.”

And what about MSNBC? It had no effect until the 2008 election, after it had made the switch to liberal prime-time programming. At that point, it becomes pretty similar to Fox in the opposite direction. But the effect is subtly different:

The largest elasticity magnitudes are on individuals from the opposite ideology of the channel, with Fox generally better at influencing Democrats than MSNBC is at influencing Republicans. This last feature is consistent with the regression result that the IV effect of Fox is greater than the corresponding effect for MSNBC.

….Table 16 shows the estimated persuasion rates of the channels at converting votes from one party to the other. The numerator here is the number of, for example, Fox News viewers who are initially Democrats but by the end of an election cycle change to supporting the Republican party. The denominator is the number of Fox News viewers who are initially Democrats. Again, Fox is more effective at converting viewers than is MSNBC.

The difference in persuasion rates is significant: the study finds that in the 2008 election, a full 50 percent of Fox’s left-of-center viewers switched to supporting Republicans. For MSNBC, the number of switchers was only 30 percent. That’s a big difference.

Now, in real-world terms this is still a smallish effect since neither channel has a lot of regular viewers from the opposite ends of their ideological spectrums in the first place. Still, this is interesting. I’ve always believed that conservatives in general, and Fox in particular, are better persuaders than liberals, and this study seems to confirm that. But why? Is Fox’s conservatism simply more consistent throughout the day, thus making it more effective? Is there something about the particular way Fox pushes hot buttons that makes it more effective at persuading folks near the center? Or is Fox just average, and MSNBC is unusually poor at persuading people? I can easily believe, for example, that Rachel Maddow’s snark-based approach persuades very few conservative leaners to switch sides.

Anyway, fascinating stuff, even if none of it comes as a big surprise. Fox really has had a big effect on Republican fortunes over the past two decades.