From Graeme Wood’s 10,000-word exegesis in the Atlantic on the origins and true beliefs of ISIS:

Its rise to power is less like the triumph of the Muslim Brotherhood in Egypt (a group whose leaders the Islamic State considers apostates) than like the realization of a dystopian alternate reality in which David Koresh or Jim Jones survived to wield absolute power over not just a few hundred people, but some 8 million.

A friend recommended I read this, so I plowed through it yesterday afternoon. Here’s the main takeaway:

Much of what the group does looks nonsensical except in light of a sincere, carefully considered commitment to returning civilization to a seventh-century legal environment, and ultimately to bringing about the apocalypse….They refer derisively to “moderns.” In conversation, they insist that they will not—cannot—waver from governing precepts that were embedded in Islam by the Prophet 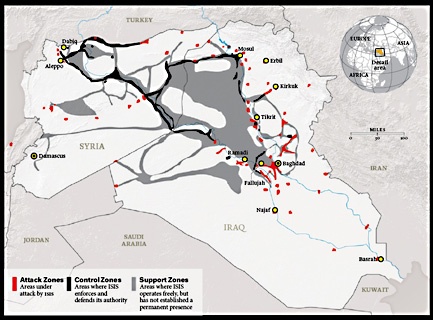 Muhammad and his earliest followers. They often speak in codes and allusions that sound odd or old-fashioned to non-Muslims, but refer to specific traditions and texts of early Islam.

Wood says that we benefit in two ways from ISIS holding such sincerely medieval and millenarian views. The first is obvious: it severely limits their potential audience for converts. The second benefit is more recondite: one of those medieval views is that the Koran demands the establishment of a new caliphate. And this is not some wimpy, aspirational caliphate that exists only in the indefinite future. That’s for milksops like Al-Qaeda. This is a right-here-and-now caliphate. But it turns out that a caliphate requires control over actual physical territory:

Al?Qaeda is ineradicable because it can survive, cockroach-like, by going underground. The Islamic State cannot. If it loses its grip on its territory in Syria and Iraq, it will cease to be a caliphate. Caliphates cannot exist as underground movements, because territorial authority is a requirement: take away its command of territory, and all those oaths of allegiance are no longer binding.

This means, for starters, that ISIS is not a big threat to the United States. Unlike Al-Qaeda, it has no particular interest in attacking the West. Its goal—in fact, its religious duty—is to establish control over territory in the Middle East. And that also represents a major weakness:

Given everything we know about the Islamic State, continuing to slowly bleed it, through air strikes and proxy warfare, appears the best of bad military options. Neither the Kurds nor the Shia will ever subdue and control the whole Sunni heartland of Syria and Iraq—they are hated there, and have no appetite for such an adventure anyway. But they can keep the Islamic State from fulfilling its duty to expand. And with every month that it fails to expand, it resembles less the conquering state of the Prophet Muhammad than yet another Middle Eastern government failing to bring prosperity to its people.

The whole piece is worth a read.