After a marathon session, we now have another cease-fire in the Russian war against Ukraine:

The cease-fire is scheduled to begin at midnight on Saturday, but the 13-point compact appeared fragile, with crucial issues like the truce line left unresolved. Over all, there seemed to be no guarantee that the problems that 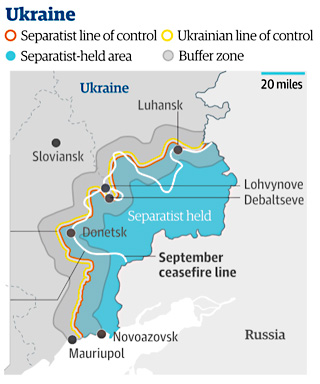 marred the cease-fire agreement reached here in September had been ironed out.

The very fact that it took more than 16 hours of intensive negotiations to reach an agreement, and that the leaders announced the accord in three separate news conferences, seemed to highlight a certain lack of unity.

….“Despite all the difficulties of the negotiating process, we managed to agree on the main things,” Mr. Putin said. Those issues included the withdrawal of heavy weaponry, a promise for constitutional change, and “special status” for the breakaway regions of Donetsk and Luhansk, he said….The deal calls for heavy artillery to be withdrawn at least about 15 miles from each side, and the biggest missiles even farther. The withdrawal is scheduled to start two days after the cease-fire and to be completed within two weeks.

Needless to say, this doesn’t sound all that promising, especially that business about “special status” for Donetsk and Luhansk. However, the talks produced at least one concrete accomplishment:

The White House has said it will await the outcome of the cease-fire bid before making a decision on whether to send arms to Ukraine’s military — a move strongly opposed by Moscow.

Ukraine also got something out of the deal: the IMF announced a $17.5 billion loan to Ukraine, which will keep them from going bankrupt. The Guardian notes that the talks nearly broke down before Thursday’s announcement:

The negotiations appeared extremely tense and highly combustible with simmering hostility between Putin on the one hand and Merkel and Poroshenko on the other. At various points during the night, the talks looked close to collapse, with Poroshenko leaving the negotiating table and talking of being confronted with “unacceptable conditions”.

Overall, it looks to me like Russia got more out of this deal than either Ukraine or Europe. A lot depends on whether Russia really withdraws its heavy artillery and keeps it withdrawn. Like everyone else, I have my doubts. This seems more like a chance for Russia to regroup and set conditions on the ground than it does a real agreement. We’ll see.