Earlier this morning I mentioned the Brennan Center’s new report on the decline in crime over the past two decades, and one of its prime focuses is on incarceration. One of the authors of the report explains at 538 what they found. Basically, it turns out that 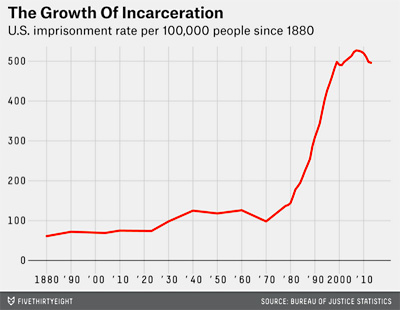 locking up more people does have a deterrent effect, but that effect plummets when you start locking up people at huge rates—as we’ve done:

It’s because of these elevated levels that we’re likely to see diminishing returns. If we assume — fairly! — that the criminal justice system tends to incarcerate the worst offenders first, it becomes clear why. Once the worst offenders are in prison, each additional prisoner will yield less benefit in the form of reduced crime. Increased incarceration — and its incapacitation effect — loses its bite.

….And diminishing returns are what we saw. Crime rates dropped as incarceration rates rose, for a time, but incarceration’s effect on crime weakened as more people were imprisoned. An increase in incarceration was responsible for something like 5 percent of the decrease in crime in the 1990s, when its levels were lower, but has played no meaningful role since. If I were speaking to a fellow economist, I’d say the incarceration elasticity of crime is not distinguishable from zero. At a cocktail party, I’d say that crime no longer responds to changes in incarceration.

That sounds about right to me. The 5 percent number might be debatable, but the basic idea that we went way overboard on incarceration is hard to argue with. It was pretty reasonable to believe that incarceration rates were too low in the 60s and early 70s, and that tougher sentencing laws would help deter crime. So we passed tougher laws and built more prisons. But by the end of the 80s, we’d almost certainly gone as far as we needed to. Locking up ever more people just wasn’t having much of an effect. But we did it anyway. We didn’t just double prison capacity, we doubled it again and then built even more after that. I’d say it’s almost a dead certainty that the last doubling was simply wasted money that had no effect on crime rates at all.

It’s also worth noting that this is an inherently hard subject to study. After all, crime rates did skyrocket during the 70s and 80s. And if you have twice as much crime, then you’re likely to lock up twice as many people. Needless to say, that doesn’t necessarily mean that higher incarceration rates had an effect on anything. It was the other way around: higher crime led to higher incarceration rates. That’s perfectly natural, but it makes it hard to then work backwards and try to estimate the effect in the other direction.